Chrissy is hiding from her abusive boyfriend at a friends house. He tells her to stay in the garage until he can drive her out of town. While she is waiting she notices a bunch of rope sitting on top of the tool chest. He comes back in to ask if she wants anything to drink and she questions him on what he uses all this rope for. He tells her he uses it to tie up naughty girls. Chrissy likes that answer. “What if I told I was naughty girl” she says, suggesting that he should tie her up. Initially he tells her that’s not a good idea, but she persists. “What do you think I’ve never been tied up before?” He is surprised to hear that she has. She even challenges him that she could probably escape from anything he tied her up in. He can’t resist the challenge!

Before long Chrissy’s wrists are tied tight behind her back and her ankles are bound as well. He asks her if he likes big things in her mouth and she says she does. She opens her mouth wide and he gags her with a huge white ball gag. Not exactly what she was expecting! She struggles and tries to tell him that he should tie her up even more but you can’t understand a word she is saying with the large ballgag in her mouth! He comes back in a removes the gag to find out Chrissy wants to be tied up even more! So he ties her elbows together behind her back. Then he surprises her by gagging her again, this time with a wad of panties stuffed in her mouth and tight cleave gag to seal them in! He proceeds to add more rope around her chest then pulls her arms up into a chicken wing. She really wasn’t expecting that! She struggles around but knows there is no chance she is going to escape from her predicament! She still enjoys squirming around in the strict bondage. Seeing how much she is enjoying herself he decides to open her blouse then give her something else he is sure she will enjoy being the naughty girl she is! A nice tight crotch rope and hogtie! She continues to struggle and roll around on the garage floor. It really turns her on to feel so helpless in the tight bondage and she hopes he has more ideas of how he can take advantage of the vulnerable position she is in! 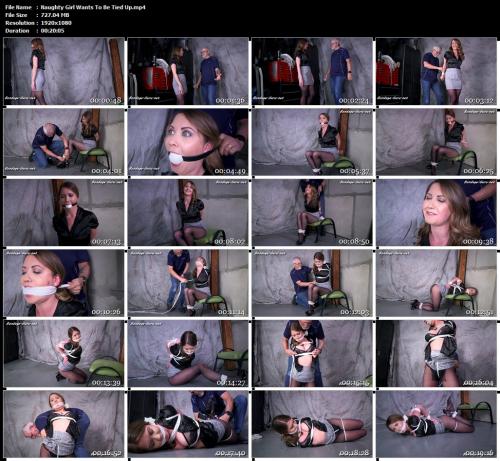