Slave Chrissy has not been the best girl lately and we all know what happens to bad slaves…. they get punished! She is led in already shackled with a chain wrapped around her waists securing the handcuffs in place. She is collared and wearing nothing but her high heels. Her master pulls her hair and slaps her face hard as he explains why she is being punished. She agrees to take it like a good girl. He chains her up to the wall by her collar and begins by clamping her nipples with weighted nipple clamps… slowly adding more and more of the magnetic weights until he has used them all! He makes her shake them around as they tug hard on her perky nipples. Then he removes her heels and makes her spread her legs wide. He begins flogging her front which causes one of the clamps to snap off. This is obviously painful for her but it just gives him an idea to flog the other one off too! Next he flogs her shaved pussy before turning her around to insert a large jeweled plug into her tight butthole. Then the punishment resumes. He makes her count all the strokes and thank him after each set. An intense flogging ensues, followed by the leather paddle and finally the cane until her ass is nice even shade of pink. He turns her back around and decides that she took her punishment so well that he will give her a reward…. plus he just loves forcing her to cum for him! He uses the magic wand on her until she has a body shaking orgasm. At the end he unchains her from the wall and has her kneel in front of him in first position. When he lifts her head up to look at him we see a happy smiling slavegirl who is sure to be more obedient in the days to come! 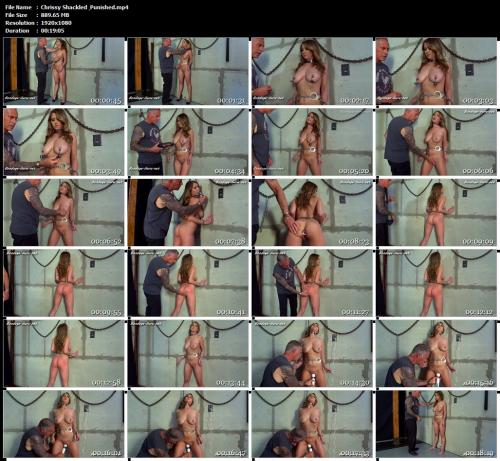