My best friend had this really looking girl friend named Raven. One day she called me and told me that my friend really needed to see me. She said he and she would explain the details when I got there. But when I arrived, only Raven was there. Not only that, but I was surprised to find her dressed in only her garters, panties, stockings, bra and a pair of high heels. I explained that I wasn’t comfortable being there with my best friends girl friend dressed as she was. But she didn’t seem to care. She told me that she had the hots for me and wanted to play a naughty kinky game. Then she pointed at a pile of rope and said she liked being tied up. I told her, “No Way!” But she insisted and threatened to tell her boyfriend that I had been coming on to her, while was away and today, I tried to force myself on her. She left me no choice but to play her kinky little game. Not having much experience at this, she explained the way she wanted to be tied until I had her completely trussed up. And Boy! was she really turned on. Then things started to crazy when she told me that she wanted me to put something in her mouth. I knew she wanted me to unzip my pants and shove myself in her open mouth, but I surprised her by stuffing and tying a pair of her panties in her mouth. I now had her bound helpless and gagged. As she struggled and made sounds through the tight gag, I could not help but noticed that I was getting a bit turned on too. Then I remembered an incident with my best friend several years in the past where I caught him fucking my girl friend at his house. I forgave him but broke up with her. I eventually got over it. So I thought to myself, maybe playing with Raven just this one time would be OK. And this bondage stuff was really fun. So I went for it. First I tied another piece of rope between her legs. I did this over her black panties and when I was sure it was centered in the right spot, I pulled it tight until I knew it was tight up her pussy. This seemed to get Raven going. Then when I pulled her big tits out of her bra, that got smile out of her. I stood back and watched as Raven started to squirm around on the floor. It was obvious that the crotch rope was really getting to her and soon her moans got very loud. Then I saw her go crossed eyed as she made herself cum in her panties. That was all it took for me to completely give in. I couldn’t get the gag off fast enough and once I did, she opened her mouth wide and told me that she wanted me to tie her to the bed and do naughty things to her. 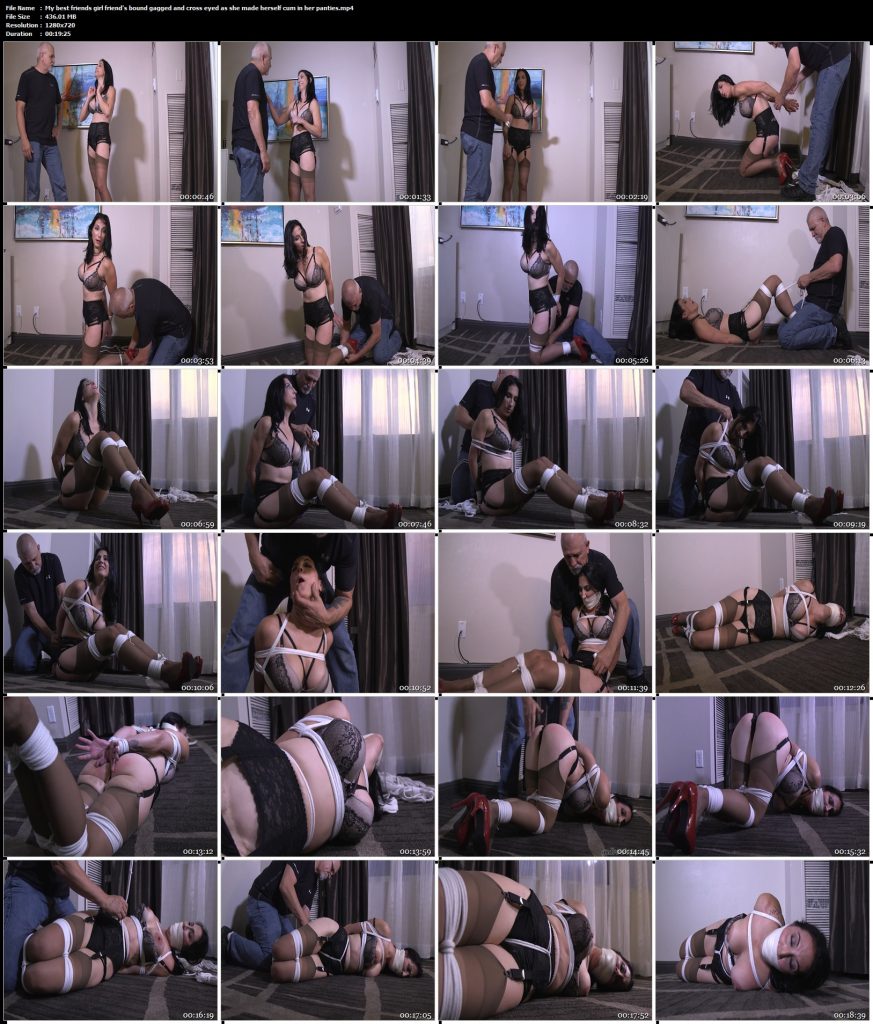