I had been casing this place out on the rich part of town and found out the husband worked during the day leaving his wife who I later learned, was named Amanda, home alone. But being it was the holiday season, I noticed that everyday she left early to go out shopping. It was a couple of days before Christmas when I decided to hit the place. I waited and watched as she got into her car and drove away, when I broke in. But as I started to look around, I heard her return. Luckily I always come prepared with rope for situations like this. I hid and waited until she walked in when I grabbed her. Video Begins: I dragged her into the living room and started to tie her up. When she started to complain, I warned her to shut up. A short time later, I had her tied hand and foot when I heard noise outside. I looked out the window and saw her gardeners had arrived and were unloading their equipment. Worried that this lady would start screaming, I left her as I went off looking for something to gag her with. I found exactly what I needed in a dresser drawer in the master bedroom, a pair of panties. I returned to the lady and stuffed her mouth with the panties and then tied a rag between her teeth very tightly to gag her. Still not satisfied I had her restrained well enough, I used more rope to tie her arms and elbows together. I also tied a piece of rope around her waist and pulled it through her legs just below her crotch. I pulled it tight and connected it to her hands and then to her ankles until I had her in a tight hogtie. I looked the lady over and was satisfied that she wasn’t going anywhere and that I had her gagged well enough that no one would hear her muffled cries for help. Besides, with the their lawn mowers running, I am sure the gardeners couldn’t much of anything anyways. It was then that I realized what a good looking woman I had trussed up tight and decided to get a better look. When I unbuttoned her blouse, I saw she was wearing one of those old fashion bras that would take some work to get off of her. I decided to leave her and come back later to work on it. After going through her house and finding everything I wanted, I returned to the lady and found her exactly the way I left her. I rolled her on her side and after a little bit of work, I finally got that bra down and was rewarded with the view of some big awesome looking tits. I imagined just how much fun it would be to cut that crotch rope off, pull her pants and panties down to have a little fun. But I don’t do those types of things to my victims. So I made my getaway leaving the lady struggling bound and gagged with her big tits out. 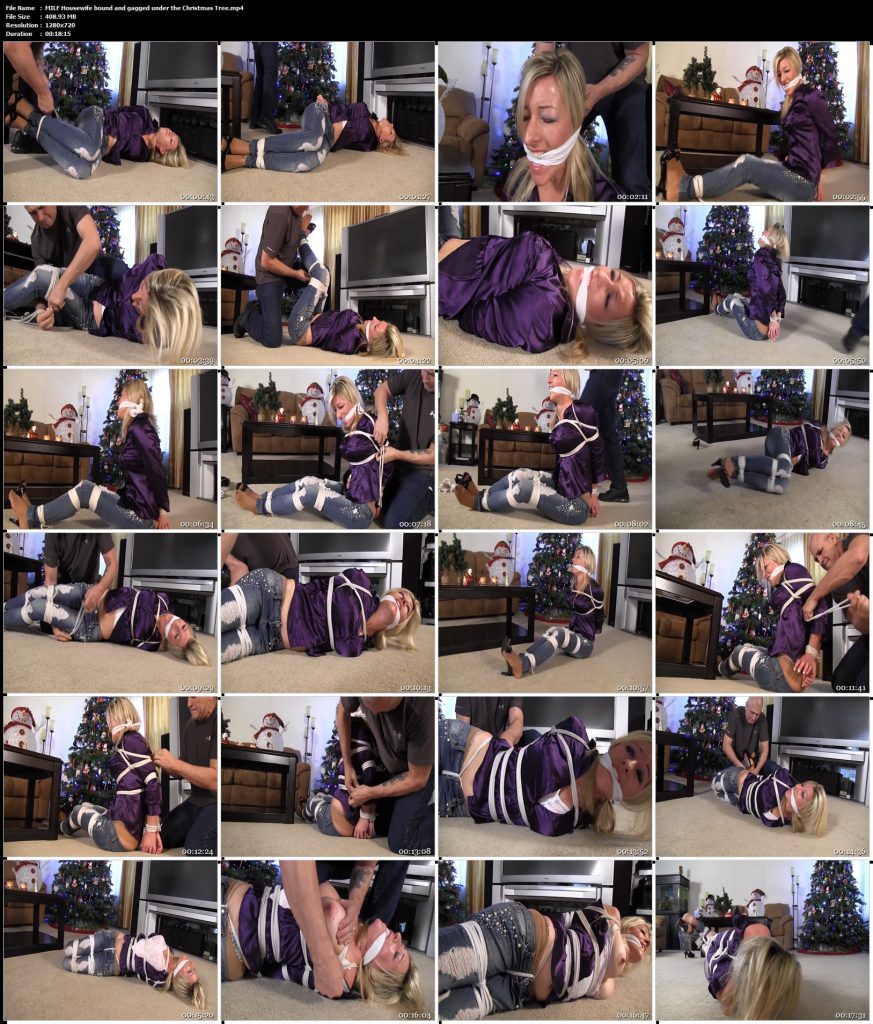