Lola arrives at the bondage therapist at the recommendation of her friend who said his methods really worked for her. Little does she know her new found ‘friend’ actually works for the bondage therapist and she is walking right into a trap! He warns her that his methods are a little unconventional but she insists she is open to trying something new to find stress relief. Soon she will wish she wasn’t so open to new experiences!

He tells her to lay down on the couch and begins to help her get more comfortable by removing her sneakers and kneesocks. She finds it a little strange at first but lets him do it anyway. Then he starts to tie legs together with rope! She is not quite sure what to think and continues to go along with it. Then he ties her hands together behind her back and it’s obvious she’s starting to have second thoughts. She asks him if this has a high success rate. He ensures her that all of his clients see major improvement! He lets her struggle against the ropes for ‘stress relief’ but he soon comes back with more rope and begins tightly binding her elbows together. She admits to him that she isn’t so sure about this after all. She thought it would be more relaxing but if anything she is feeling more stressed! When he asks her why she isn’t enjoying herself she tells him she doesn’t like that she can’t get out! Too bad that’s exactly what he was aiming for!

Lola questions whether he is even a real therapist and his creepy response really gets her heart racing. She tells him she wants to stop now and to let her out immediately. He finishes off hogtying her elbow rope to her ankles then pulls up her top to check out the goods. When he brings up her ‘friend’ she comes to the realization that the bitch set her up and wasn’t really her friend after all! He then tells her that he has another appointment in the other room and will be back later on to continue their session. She is tightly cleave gagged with a long white cloth to keep her quiet while he is away. He has no worries about her escape, her predicament is certainty inescapable! She is left to struggle and worry about what else he has in store for her when he returns! Growing increasingly distressed by the tight ropes and gag she tries her hardest to wiggle free from her predicament only to realize she is completely helpless and will never be able to get free on her own! 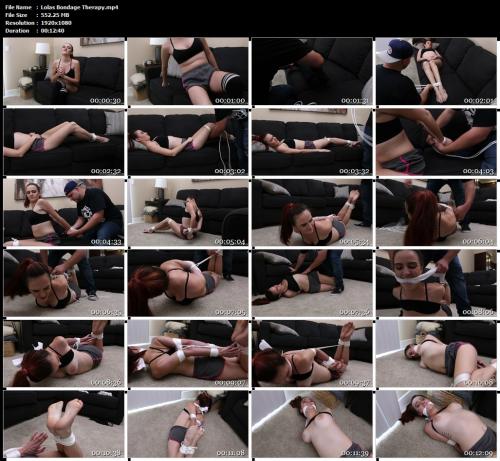