As Chrissy Marie finishes telling him about her experience and job qualifications he could hardly pay attention to a word she was saying. He was too busy staring at her huge breasts that are practically bursting out of her blouse! It’s pretty obvious too and Chrissy takes notice. She asks him if he had any other questions for her. The truth is there is one more thing he wanted to ask her. He just isn’t sure how. He begins by explaining to her that he used to play a special game with some of his past personal assistants. Of course she asks what kind of game. He tells her it involved them being restrained and that it’s kind of hard to explain but he would be happy to show her!

Chrissy is hesitant but she really needs the job so she agrees to let him demonstrate. He starts by tying her hands behind her back with white rope as she tells him she really didn’t expect to get tied up today! She asks him questions about this so called game they are playing and quickly grows more suspicious of the man. Eventually he reveals that 90% of the job she would be doing would consist of this ‘game’. Her ankles now bound tight she is very uncomfortable and asks to be released immediately! She is a professional and this is definitely not the job she was expecting! Too bad for Chrissy there is no going back. He already decided that she got the job and she will be hard pressed to escape after he binds her elbows together torturously tight! She is gagged with a knotted cleave gag to keep her quiet as he finishes tying her up then pulls her big tits to give them a good squeeze! He then leaves her to struggle and find out how the rest of the game is played!

Chrissy desperately tries to come up with a plan knowing there is no way she can possibly get free from the ropes, especially with her elbows bound together so damn tight! She feels hopeless and humiliated as she struggles helplessly but after a couple minutes she spots her cell phone up on the couch! She works off her high heels and after a brief struggle she is able to retrieve it with her stocking feet, but turns out it was all in vain, her battery is completely drained! That was her only hope and now she has absolutely no chance of escape! 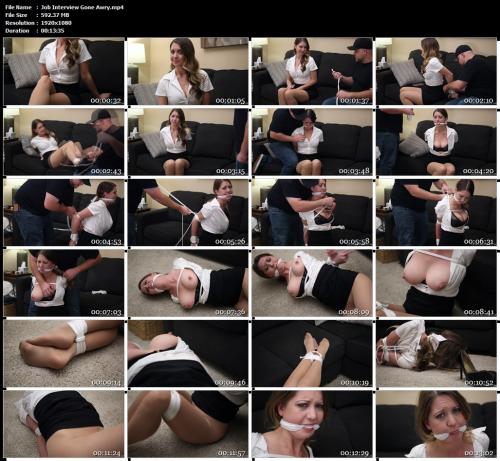