Sahrye is married to a very rich man who likes to dress her up and show her off to his friends. Because of this, he makes her stick to a strict diet in order to maintain her girlish figure. But Sahye has a weakness for sweets.

The video begins with Sahrye downstairs eating ice cream and marshmallows. Things she is not allowed to eat. Her husband catches her and becomes very angry. He takes her in the living, bends her over a chair and tells her, “So you want to look like a little piggy!” As he gives her a spanking, he tells her to “oink!” like a pig. When she refuses, he ties her up and brings out some items has saved for such an occasion. These items are costume pigs nose and ears. He puts them on Sahrye. Still she refuses to “oink!” as he demands. So he stuffs and ties a pair of panties in her mouth to gag her that now he wants to hear her grunt and squeal like a little pig. As she struggles bound and gagged, Sahrye has no choice but to grunt and moan through the gag. Now totally humiliated, Sahrye is very sorry that she veered off her diet and knows she will not be eating anything sweet in the near future. But this ordeal is nowhere near over as her husband hogties her and pulls her dress top down to expose her boobs. He then tells her that he doesn’t have an apple. So instead he shoves a great big red ball gag in her mouth. Sahrye will then spend the rest of the day trussed up and stuffed like a little piggy. 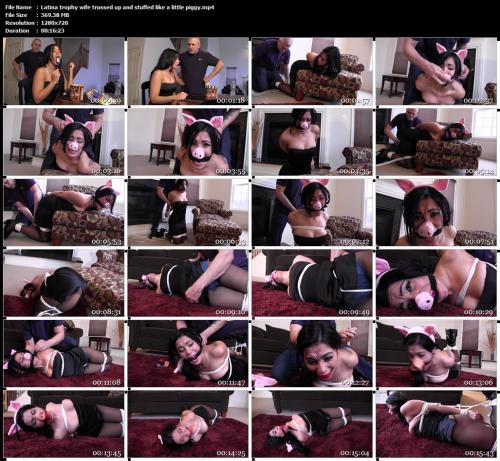