Julia’s punishment is to stand in the corner, bound and gagged up with a huge ball-gag. If she wants to dress in a white blouse with a vinyl waist cincher, pvc mini skirt and really high heels that are strapped tightly on her ankles then she’s just asking for some kinky rope bondage. Her legs, so smooth, shiny and silky are roped up tight at her knees and ankles. Squelching her shoes together she tries to loosen up the tight ropes. With her hands bound behind her back and rope around her upper body keeping her arms tight to her body and the tight waist-cincher her breasts are at attention just protruding out and asking to be grabbed, squeezed and fondled. Her shiny lips wrapped around the ball-gag strapped as tight as it will go soon will succumb to drool leaking from her wet mouth. It’s not long before she realizes that she won’t last standing in the corner tied up and gagged. There’s a bed across the room that she’ll have a chance to rest her poor feet locked in high heels. Starting to hop it’s a slow go. She’s very careful to keep her beautiful, voluptuous body balanced. As gracefully as she can she finally makes it, falls on the bed rolling around trying to reach at her shoes that her feet have had just about enough of. She slides off the bed onto her knees bent over with her ass glowing in her shiny skirt as she struggles about. getting back up on the bed her skirt gets shorter and shorter the more she reaches at her shoes showing her white lacy panties. As Julia sits tied up, ballgagged and struggling on the bed she looks around the room hoping to find a way out of her punishment. Laced up tightly in her shiny vinyl waist-cincher it’s restricting her movements and she’s been trying to squirm those shiny, sexy, smooth legs out of their confining ropes. Trying to suck back the drool from her huge ballgag her wet lips have been wrapped around from a while it’s taking it’s toll on her jaw. Her feet are aching from her high heeled shoes that are strapped onto her ankles and she can’t reach them all tied up and with the restricting waist-cincher. Inspecting his bound and gagged punished princess, Bass feels her up as she tries to avoid his advances. With her ample set of breasts ready to pop out he decides to help out matters and begins unbuttoning her blouse making sure the tight waist-cincher stays on. Pulling her blouse open it reveals her satin bra cupping her tits tightly next pulling her tits out and folding her bra under her breasts. Squeezing, pawing and smacking her tits and body, Julia is helpless and submits to the rough manhandling. Pointing at her to behave and be still he leaves her bound, gagged and with her boobs out on display humiliating her. Not being able to be still too long and making gagged noises he’s had enough and roughly positions her on the bed face down. He ropes her feet and pulls them back hogtying her. Playing with his bondage toy she’s rolled back and forth on her side getting her skirt pulled up, her ass spanked, tits squeezed and fondled up. Leaving her hogtied on the bed she can finally reach at her shoes but is in too awkward of a position to unstrap them as her hands are pinned under them. Putting up quite a nice struggle for several minutes like this she tires herself out and gets very uncomfortable. She begs to be let out but little does she know that it’s just the beginning and he has no plans of releasing her. This is a full movie of With My High Heels Strapped On My Ankles, I Was Tied Up, Ball-Gagged And Made To Stand In The Corner and Dressed Up In Fetish Attire, Bound And Ballgagged, He Pulled Out My Boobs And Hogtied Me. 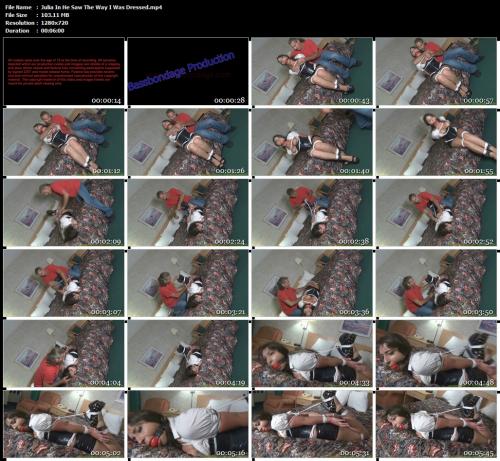 Samantha In: I Was Kept Tightly Gagged And Taped Up Like Some Kind Of Bondage Toy – A GIRLY CALAMITY BY BASSBONDAGE

Farm Girl tied up and gagged in the barn