Dixie and Carissa are lying around in Dixie’s hotel room with nothing to do. Dixie tells Carissa that maybe they should go for a swim. So Carissa leaves to go to her room to change into her bathing suit. In the mean time, a man comes into Dixie’s room and grabs her. Before she can do anything, he ties her up with rope. And just in case she thought she was going to scream for help, he stuffs and ties a pair of panties in her mouth to gag Dixie. A short time later, Carissa returns in her bathing suit, ready to go to the pool. But then she finds Dixie struggling bound and gagged. before Carissa can run off for help, the man grabs her too. He ties her up on the bed right next to her friend. Then with Dixie watching, the man stuffs and ties a pair of panties in Carissa’s mouth to gag her. Both girls struggle hard to get loose. They also try to cry out for help. But they are ties tight and the gags make it impossible for anyone to hear them from outside the room. Then things get really bad when the man pulls their bathing suit tops down to expose their boobs. Then after hogtying them, he makes them lie on the bed face to face. The man then makes the girls start rubbing themselves against each other. First he makes them push their hips together and then rub their bare boobs against each others. Finally, he make them kiss each other with their gagged mouths.He then leave them to struggle hogtied and gagged for the rest of the day. 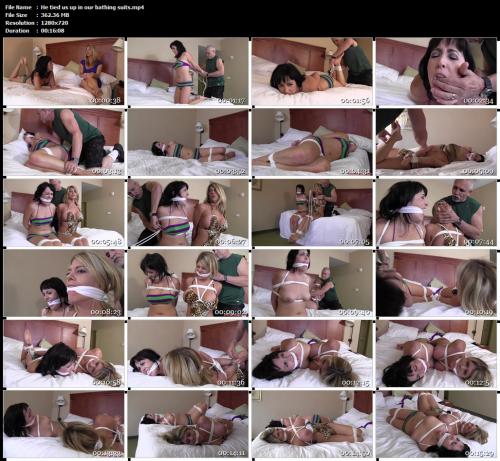