I must live in one hell of a high crime area, because my home is broken into constantly. Fortunately for me, all the burglars seem to be sexy young ladies. Unfortunately for them, they’ll never get away without being strictly bound and gagged! Jamie Knotts is the latest to be taught a lesson. Her arms bound in a tight box tie and anchored to the metal frame, she’s unable to stand and release herself due to the nice little frogtie her legs are bound in. Not willing to listen to her excuses, I stuff her mouth and wrap her lower face in self adhesive wrap. Now that she can’t back talk me anymore, I leave her to stew in her plight. She twists and turns, trying to get to her feet, but she’s only met with endless frustration. Well, never let it be said that I’m a mean guy. If she’s going to be in that position, she may as well get some enjoyment out of it! It add a few turns of micro foam tape to her gag and then give her a nice snug crotch rope that I anchor to each side of the framework. Now moving in any direction puts pressure on her crotch! Oddly, she doesn’t seem to enjoy this much either, but I don’t care. She can just endure that, growling and gag talking up an angry storm! Next, she gets a nice strappado and her catsuit is opened to reveal plenty of cleavage!! Her gag has been replaced with a makeshift bit gag that makes her drool all over everything! Finally, her head is pulled down and tied off at her knees, ensuring she’l be getting a good stretch while giving me a nice view of her big tits trying to slip out of her costume! 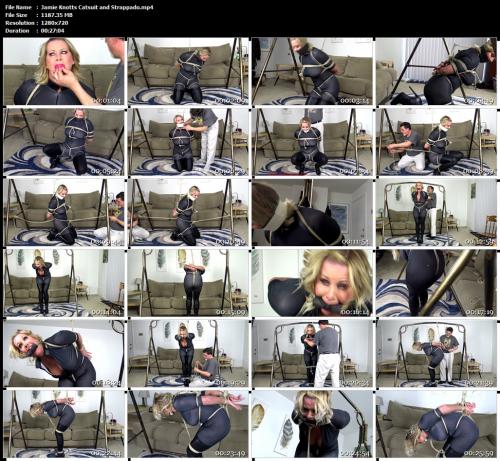