Nyxon comes over so we can practise some self bondage. I need to learn a few tricks of the trade and the raven haired beauty is the perfect person to teach me. I’m really not liking her attitude right from the get go… she criticizes my rope, my clothing, my high heels – just about everything! I bite my tongue because I need her to show me the ropes on so I can tie myself up, but things aren’t going well. Finally we begin. I want to start with the crotch rope and Nyxon always makes everyone’s ass look so ripe and delicious, but I’m not getting the hang of her butt lift rope trick. Wow! Her’s looks so much better than mine does. She starts showing up incorporating the knee tie with the same rope, but obviously my rope isn’t long enough. I manage to bind my knees with another rope but it looks messy compared to Nyxon’s sexy self bondage. I pull out my new hot pink ballgag and Nyxon bursts out laughing calling it a marble. Finally I snap and hand over mouth smother her until she’s napping. I add a chest harness to make her her big tits look even bigger while the poor thing’s head bobs and rolls around. I force a huge ballgag between her lips and enjoy her humiliation as the drool flows out of her mouth. I smack Nyxon around to fully wake her then bind her ankles. I remove my crotch rope and use it to elbow tie her. Nyxon moans and grunts through her gag as I finish her off in a tight little hog tie then leave the uppity Nyxon struggling frantically on the rug unable to escape the self bondage gone bad!!! 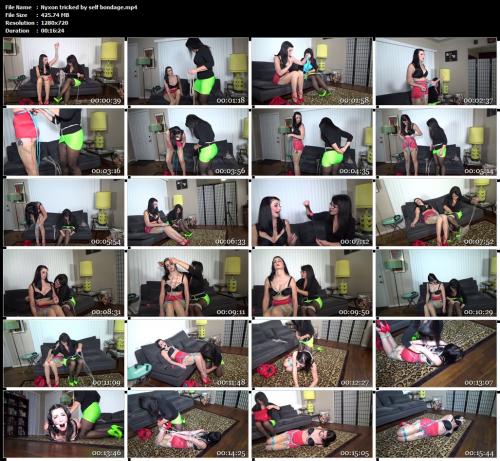