Chrissy is out of town for a reunion. Tonight she has spent some time in the hotel bar area. But now she is on her way up to her room. As she walks through the hall, she is not paying attention. When passes one of the room, a man jumps out and grabs her. So she cannot cry out, he covers her mouth with his hand. Once inside, the man gags Chrissy with a ball gag. With her now muffled, he quickly ties her up. Later, he changes the gag by stuffing and taping her mouth. Chrissy will not know why, but man was sent to do this to her by someone from her past. He will keep her all night to humiliate her. This will include tying her in a very tight hogtie. She will also be crotch roped and stripped until her boobs are exposed. Chrissy will then struggle bound and gagged until the man receives further instructions on what else to do to her. 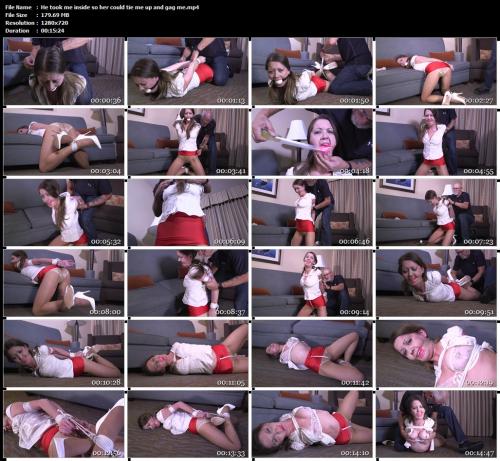