He is hiding from authorities and needs to get out of town. Knowing Jamie owes him money, he sneaks into her place. Jamie sees him and tells him that he cannot stay. She tells him that people have come looking for him and are watching her place in case he shows up. She gives him the money she owes him and tells him that he has to leave immediately. But then Jamie realizes that it is possible someone saw him come in. Worried that she could get into big trouble, she tells him to make it look like she did not cooperate. To do this, she tells him to tie her up, gag her and make it look like he roughed her up. A short time later, Jamie finds herself tied up tight with rope. Her mouth is also stuffed and taped to gag her. It is very painful and uncomfortable, but she knows she has to endure this for just a short while. In the end everything will work out when she is found struggling bound and gagged with her big boobs out. 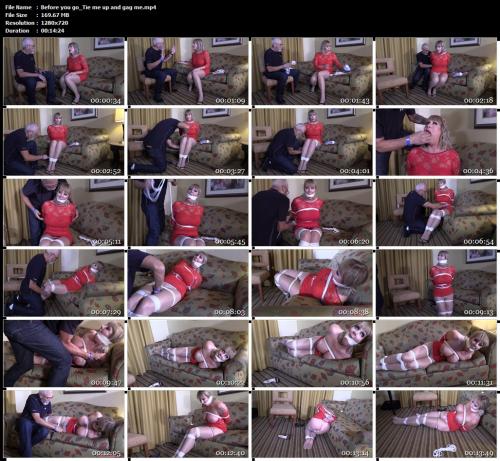