Chrissy is a detective, and a damn good one at that. She’s been on the trail of this criminal and his gang for months now. She’s taken down his cronies, and finally cornered him! Chrissy walks into his house and announces her entrance. She looks around a little bit but the criminal got the drop on her and ambushes her from behind, clamping a rag over her mouth and nose. “C’mon! I thought you were ready!?” he says. Chrissy tries to protest angrily “Well I should tell you…you wouldn’t be even if you did get the drop on me” Chrissy struggles until the doused rag has done it’s job and knocked her out.

Chrissy wakes up in another room. She quickly gathers herself, realizing her wrists are tied tight, but her legs are still free! Just as she attempts to get up, the criminal comes in and stops her. “Well good morning sunshine. How’s it going?” As he grabs some rope and starts to frog tie her legs. Chrissy keeps her cool and acts coy. “Just fine actually. In a bind, but nothing I haven’t handled before. Gonna be even better when I bust out of here, call my men, and put you behind bars.” The criminal laughs “Yeah, that’ll be the day.” Chrissy struggles as the criminal finishes tying her legs tight. Then he starts to tie her elbows, upper and lower chest. “Whatever. Finish this , and make your getaway. I WILL find you again. My men have got your routine down to the last hour of the day.” The criminal laughs “MY Routine huh? YOUR men huh?” Chrissy looks in confusion “Yeaaaah? What, did you think I got here on a wish and a prayer?” The criminal grabs her by the chin and smiles “Yeah actually.” Chrissy stares at him with a stupified expression, before she can respond the criminal shoves a pair of panties in her mouth and starts to wraparound tape gag her tight. “You really don’t get it do you? Getting all of my men that fast? No roadblocks along the way? You didn’t think it was a little too easy?!” He finishes tape gagging her as Chrissy looks at him in confusion once more.

Next the criminal rolls Chrissy over, and starts to tape mitten her hands. “ALL of my men?! You were so confident in YOUR team that you came here ALONE!” Chrissy tries to gag talk back, saying “Well duh! I have backup incase I don’t come back tonight!” The criminal rolls his eyes “Oh my god, bless your heart.” He finishes tape mittening her hands and secures her wrists to her body with more tape wrapped around her stomach. Then he tells her “There is no back up.YOUR men are on MY payroll. ALL of this was for me to get YOU!” He sits Chrissy back up, unbuttons her blouse and reveals her breasts. He pinches her nipples repeatedly, and then pinches one of them hard right after taking pleasure in her screams and grunts. “I always have some hot headed fool like you coming after me. You never wondered why I’ve been getting away with this for so long? But once I learned that I finally got a babe on my tail I knew I had to have some fun!” He grabs the tape again, and this time, puts tape over her frog tied legs. “Despite everything, you didn’t get here by my credit alone. Think of this as a compliment to your character and bravado! Now you stay here while I grab what I need to finish this!” He adds one more strip of duct tape over her gag and leaves her there tightly and inescapably bound with rope and tape.

Chrissy struggles for a bit. She goes through fear, anger, sadness….realizing all of her progress so far has been guided to a dark end. Nevertheless, Chrissy tries to struggle all she can! She gets so close to the door that she forgets her hands are bound so tight to her stomach she can’t make a bang on it. Chrissy curses and tries to bang her head against the door in sadness. The criminal returns. “Huh, got farther than I thought. Good. Wore yourself out a bit huh?” The criminal pulls out a rope and loops it around her neck. Chrissy tries to screams and struggle away. Then he tells her that even if she got out the house is currently surrounded by his men and she’d get put right back in! Chrissy scowls and cusses back at the criminal. She tries to let a “FUCK YOU!” but it comes out muffled. But not muffled enough for the criminal not to catch what she said. “Fuck you? Is that what you said?” Chrissy fires back at him, with daggers in her eyes as she stares him down furiously. The criminal merely smirks and says “Well if you say so!” Chrissy’s eyes widen in confusion and terror as he props her up on her knees. She shakes her head no as the criminal unbuckles his belt, rolls her tights down, and asks if she’s ready. Chrissy looks back in terror and yells at him “NMMMPH! “FUMMMPH NMMMP-ACK” Chrissy yells, but the neck rope is tugged on and her eyes widen as the criminal has his way with her.

We come back to Chrissy now on the floor. Tights still rolled down, rope loosely around her neck, hair disheveled, still struggling, still a small bit of fire in her after all this. The criminal returns again. “Well, I had ‘your’ men take care of this. As far as the world knows you cornered me; You put up a fight, but in the end? You went with the house in the explosion!” Chrissy eye widen, head shaking no, pleading through her gag. “Relax.” He says as he begins to grope Chrissy. I set it the timer on the explosives so I have time for more. Chrissy begins to cry as he rolls her over again with her ass up and goes in for round two! 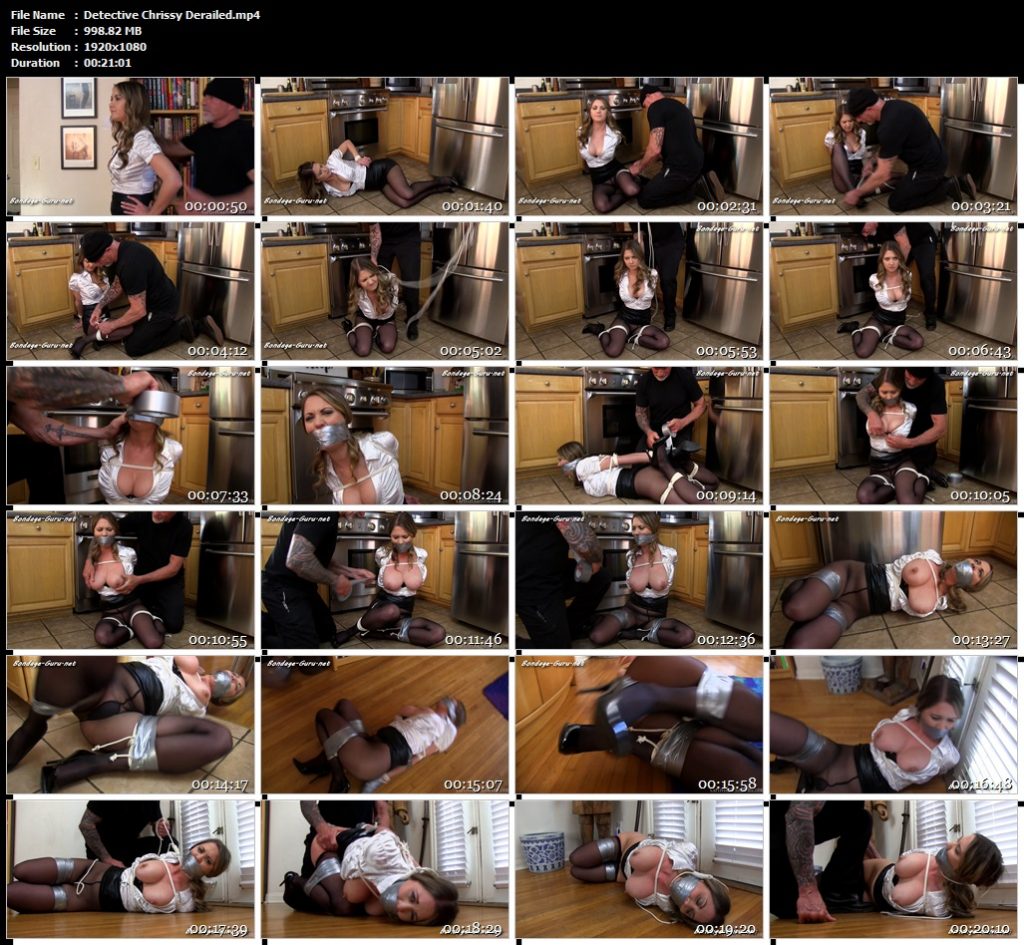