Stunning buxom blonde Britney talks with her friend about this new guy at her work whom she finds attractive, but rather timid. She confesses that she fired him due to his lack of backbone (as opposed to his competence!) and yet she wishes he’d hit on her! Laughing about putting him on unemployment she walks to the window and enjoys the view while a menacing figure approaches from behind. Suddenly she is grabbed, handgagged tightly and dragged off (while he lewdly keeps one hand on her rather large rack!). He keeps her handgagged while groping her body all over. She resists and manages to break his grip, but she doesn’t get far in those heels. Since he came prepared for her trying to get away, he ‘smothers’ her into ‘submission’. Not long thereafter we see her tied up with ropes around her big breasts and legs. She makes a bit of a racket and has to be ‘smothered’ back into ‘submission’ before her pretty mouth is tapegagged. Incidentally fondled, she is left to languish and eventually gets to struggling. Straining against the ropes, she quickly gets nowhere, but does possess some athletic prowess as she tries to hop to the front door. Before she gets far, she is grabbed and lustfully fondled. Kept handgagged over her tapegag, the masked man explains that he’s the guy she let go and clearly he’s none too happy (and a tad psychotic it seems!). For Britney this is good news as she is attracted this usually spineless fellow and clearly likes being dominated so all’s well that ends well! He’s not done keeping her in bondage just because she likes it though. Her panties are transferred from covering her pussy to being inserted into her mouth. Tape is then plastered over her pretty lips as she is again silent as he toys with her. Running his hand over her pussy she figures he’s got something more in mind. Escorted to a table where she is bent over, he ‘takes her’ as she bucks up and down. When her sounds of pleasure escape her tapegagged mouth, he handgags her to keep the noise down. Fully dominated, she is clearly receptive to this and enjoys herself as much he clearly is! Tossed on the couch, he tells her to stay put and he’ll be back so that they can continue the fun. This ordinarily hard-nosed office manager suddenly melts into submission and is ready to be dominated for the weekend! 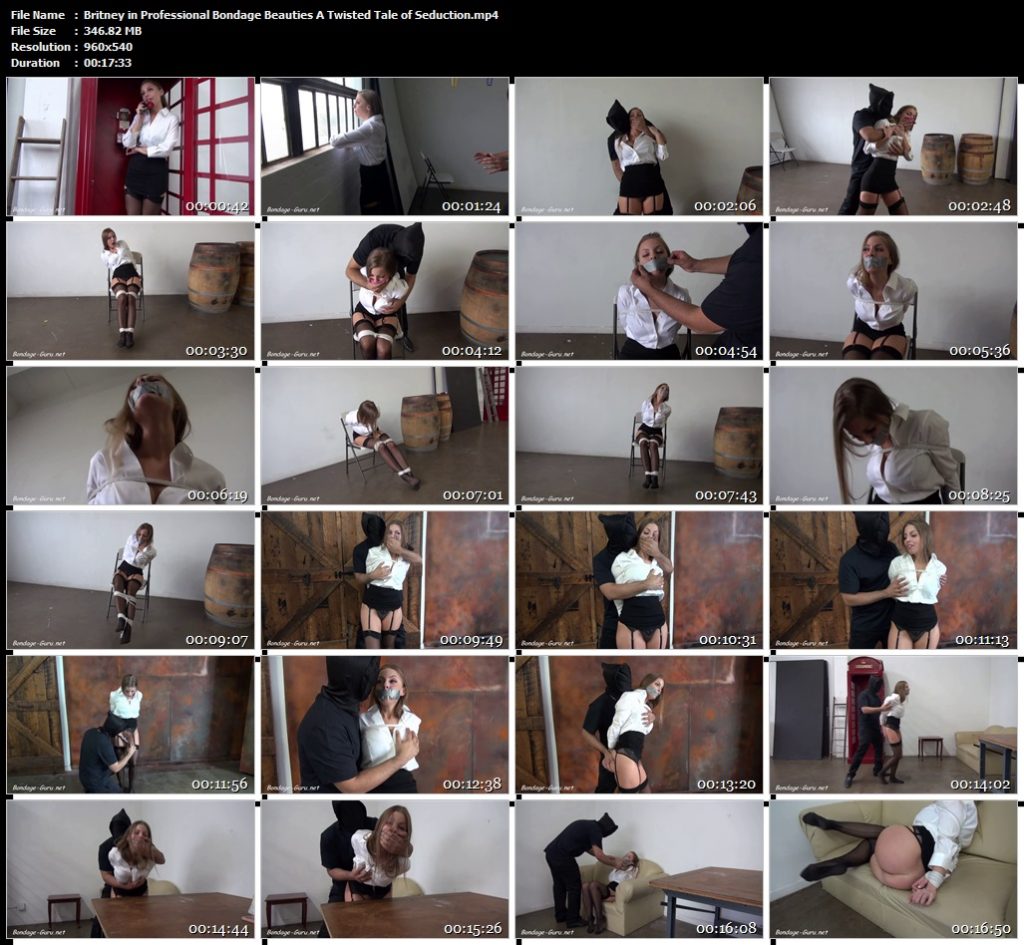