Chrissy is wanted for committing a crime, but the cop who is about to detain her isn’t aware that she also enjoys role playing arrests with handcuffs. When she gets a knock at the door and finds out it’s a cop who has a warrant for her arrest, she realizes that her fantasy is going to become a reality and is super excited! The cop asks Chrissy if she would like to put on her sneakers on and she says that she would and then puts them on. When finished she says to the cop “I know what comes next” as she places her hands behind her back. As he proceeds to handcuff her she tells him to make sure the cuffs are tight because she loves the feeling of tight handcuffs. The cop tells her it’s time to go. “Ok, I’m ready” she says as they leave for the station.

The cop walks Chrissy into the station and sits her down on the couch, telling her to wait there for him. She struggles and plays in the cuffs for a few minutes while waiting for him. Then the cop comes back and has Chrissy stand up against the wall for mugshots. He instructs her to face forward, to the right, and then to the left. She is then ordered to face the wall so he can remove her cuffs. He tells her that she has to be strip searched before she is booked in the jail. She is then instructed to take off her sneakers, socks, shirt, shorts, bra and panties. She starts to get really shy when it comes time to remove her underwear, but she knows there is no way around it. She is then told to shake out her hair and the officer proceeds to check her hair and ears and remove her earrings. Chrissy is then told to stick out her tongue and lift it up. Next she is instructed to roll up her top lip to see the gums and then the bottom lip to see the gums. She is then ordered to lift her hands above her head to inspect the armpits, then to lift each breast so the officer can inspect under each one.

Chrissy is shocked when he next instructs her to place her hands behind her head, squat and cough three times. She hesitantly complies. As if it couldn’t get more humiliating, the cop orders her to turn and face the wall, bend over, spread her cheeks and cough three more times. Then he inspects Chrissy’s hands top and bottom as well as the soles of her feet. He doesn’t see any, but he asks if she has any tattoos as he has to be sure. She replies that she doesn’t. He then tells her according to policy she will not be given a jumpsuit for the first 24 hours. She is asked to turn and face the wall and place her hands behind her back. As the cop cuffs her wrists and shackles her feet she again tells him to make sure they are nice and tight! She is taken away to the holding cell where she is left sitting in a chair naked with hand cuffed behind her back and her feet tightly shackled! 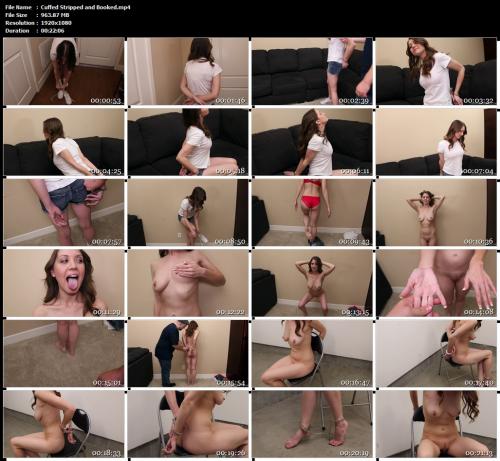