All David wants to do is relax and watch the game, but Claire has different priorities. She wants him to pay attention to her. Claire wearing a skimpy white leotard, pantyhose and high heels tries to lure his attention away from the game by grinding on him and shaking her ass in front of his face. He pushes her out of the way several times and Claire still doesn’t give up. She storms out of the room and brings multiple high heels with her, hoping to spark an interest with one of his fetishes. Again, David blows her off and tells her to relax until the game is over. Claire is not having it, she pours herself all over David in hopes that he will change his mind and she gets rejected repeatedly. Pissed, Claire leaves the room and this time brings back rope. She throws the rope on the ground and tells him to tie her up. Finally, David concedes to shut her up. He binds her arms tightly behind her back and heavily gropes her before returning to watching the game. Claire is baffled. She refuses to lose against a stupid game, so she rubs all over him while her arms are bound behind her back. David starts getting annoyed so he ball gags her hoping she will be quiet. It doesn’t work. Beyond annoyed, David decides to finally stop her advances and ties her up completely with multiple leg ropes and a breast harness. He makes her do trivial things like hopping across the room. Finally, he tapes her hands together and places her into a tight hogtie on the ground. Silenced with a larger ball gag and incapable of moving, Claire finally gets what she asked for. 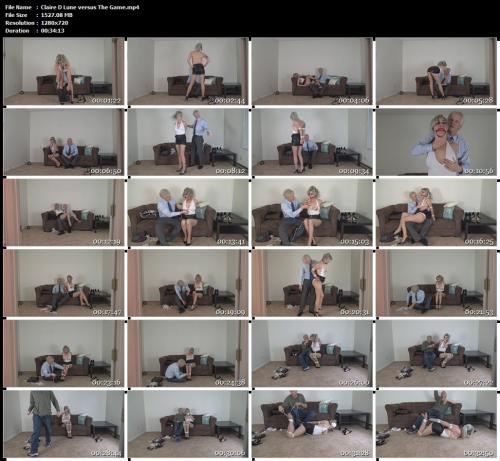