He takes her out of his trunk where she has already been bound and cleave gagged for hours. She is scared and struggling as he cradle carries her over to small mattress on the garage floor. He proceeds to bind her elbows and hogtie her tightly, pulling down her denim shorts to reveal her lacy red underwear before leaving her there to struggle and wonder what’s coming next! She desperately tries to get free, even though she truly helpless in the strict hogtie, it doesn’t keep her from putting up a fight, mmmpphing through her red bandana cleave gag as she hopelessly struggles to escape. When he returns he takes her out of the hogtie and starts untying her legs. She is still visibly worried about what he has planned for her, but is also hopeful that the bondage part of her ordeal is over. But she got her hopes up too soon! He proceeds to pull off her shorts and thong as she furiously struggle against him, then he shackle her legs since he can’t risk his little captive trying to run away! Then he unties her arms and forces her to stand up with her arms over head so he can pull off her top leaving fully nude and exposed. He cuffs her hands in front and fondles her naked body as he explains he is going to put her into permanent storage. She looks at the cage with fear, begging him through her gag to not lock her up! Too bad that’s exactly how she ends up! We see Chrissy with her arms overhead and cuffed to the top of the cage, her ankles still shackled tightly and drenched cleave gagged still in place. He closes and padlocks the last door, groping and teasing her a bit more before leaving her to struggle in the tight quarters, helplessly whimpering and hoping that someone will find and rescue her before it’s too late! 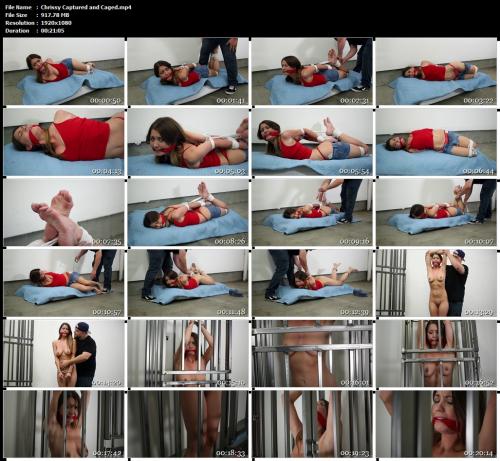