Super-heroine American Girl (Izzebella Robbins) has been caught! Lashed to a pole with bandages made overseas, the unpatriotic bindings sap her super patriot strength and prevent her from escaping! The rubber ball strapped in her mouth renders her cries for assistance to gibberish, which is pure music to the ears of the villain who has captured her! He plans to get rid of her by mummifying her tightly to the post she is bound to, then sinking the post into the new concrete foundation of his secret lair! First, however, some humiliation is in order! He lifts her super-heroine top up slowly, revealing her heroic pert breasts! Exposed and helpless, she mewls in anger, frustration and despair as the foreign made bandages climb slowly up her body, immobilizing her and sealing her fate as her strength ebbs from her body! Finally secured to the villain’s liking, the subdued super-heroine can only struggle feebly, which displeases the villain mightily. He wants her to know how hopeless her plight really is, and what better way to do so than by subjecting her to her greatest fear: SPIDERS! Wrapped like a tasty morsel to the post, American Girl goes absolutely ballistic in terror as the larger than life eight legged friends come out for a visit! Now she is in a true panic, thrashing about, screaming into her gag, her mind reeling as her sanity tears itself from it’s moorings, leaving her a bound and gagged gibbering mess! Her spirit and her psyche broken, she can only scream in terror as she awaits her demise! 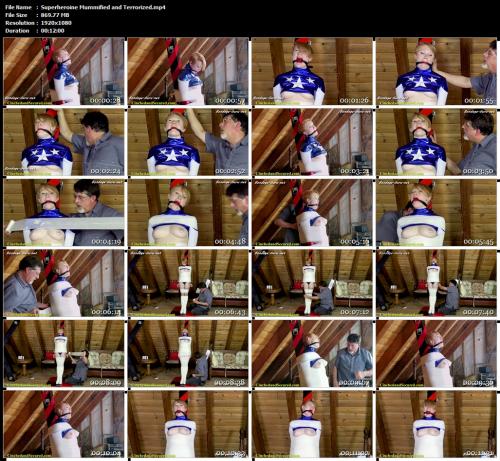