Dawn has tried her best to be a model employee, as long as you don’t count her habit of embezzling corporate funds! Her boss has discovered her crimes and gives her a simple choice: either play some bondage games with him, or go to jail for a very, very long time! Not wanting to go to prison, the ebony beauty agrees, and soon finds herself tightly hoped and gagged as she struggles for the boss’s amusement! She soon realizes, however, that he has another plan in mind! He removes her ball gag, stuffs a pair of old panties into her mouth, tapes it shut and then opens her blouse, manhandling her huge tits before hogtying the helpless girl and leaving her to struggle on the floor! Seems he had no intention of letting her getaway with her crime, because that’s what HE plans to do! As he explains how he has funneled the money out of her secret account and into his own, he informs the struggling girl that she’ll be left exactly as she is, bound and exposed, until she is discovered Monday morning along with an explanation of her crimes! As for her boss, he’s off to oversee a special project in a foreign country that has no extradition treaty, along with Dawn’s ill-gotten money! 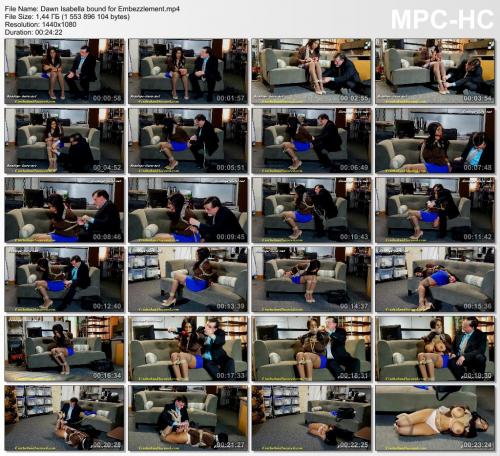