Chrissy just got home and walks into her bedroom. She reaches down and takes her heels off. She starts unbutton her shirt and is unaware of the guy quietly sneaking into her room. Just as she tosses her shirt aside he comes up from behind grabbing her arms behind her and hand gagging her. The guy holds Chrissy for a moment, hand over her mouth, as she struggles, tries to scream, and tries to squirm from his grasp. He pulls her toward the bed then falls onto his side onto the bed taking her with him. Chrissy is totally shocked but puts up a good struggle. She manages to pull her arms free but then ends up face down on the bed with him on top straddling her. Her arms get pinned underneath her, hands up near her shoulders. She tries to push him off but he is too big. The guy quickly pulls a white knotted bandana from his back pocket. He forces the knot into her mouth and cleave gags her. He then tries to get Chrissy’s wrists but she is struggling to keep her arms underneath her. He rolls to one side while still holding her in a type of bear hug and is able to grab her wrists and force her arms away above her head. While still on top of her the guy takes a rope from his pocket to tie her wrists. He takes a single strand of rope and makes some fast loops around Chrissy’s wrists and a couple quick simple knots, like a rodeo cowboy rapidly roping a calf. Chrissy yells through her gag, “What are you doing? Stop!”

The guy then gets up and walks toward to his bag, picking up some more rope out of it. Chrissy gets off the bed and moves toward the door with her hands tied in front trying to get away. The guy grabs her and drags her back to the bed. Chrissy sees him with the rope in his hand, is very scared, and says “Oh my God” “What are you going to do to me?” The guy tells her, “I’m going to tie you up, now be quiet!” She pleads “Please don’t!” as he starts to tie her ankles. Chrissy is moving her legs around struggling against having them caught. The guy has to sweep around them with his arm kind of capturing them, trapping her legs together so he can tie them up. After her ankles are bound the guy really starts to notice how hot Chrissy looks. He rubs his hands up and down her legs right up to her shorts. Chrissy is getting even more scared at having her ankles tied and feeling him rub her legs. She is taking rapid shallow breaths now and pleads with him “Please don’t!” After feeling her up for a minute he sits her upright on the bed then ties a tight neat blindfold on her. Chrissy lets out a scared, “Oh my God!” as he blindfolds her. While still behind her he strokes her arms again. Chrissy is holding her hands close in front of her to protect her breasts and resists him as he feels her up. Next he grabs her wrists and unties them. Chrissy asks him, “What are you doing?” He grab her arms and tell her “I’m going to tie your hands behind your back!” She realizes what is happening and quickly pulls her hands back in front of her. So he grabs her arms again, forcefully flipping her over face down as he tries to pull them behind her back. Chrissy is terrified at him trying to tie her hands behind her back and is fighting for all she’s worth against it! She pleads loudly as his does this “No” “Don’t!” “Stop!” “Please Stop!” With a final decisive yank he pulls her hands behind her back and ties her wrists. Once Chrissy’s wrists are bound she fights to get free but it’s impossible and very frustrating!

After watching Chrissy struggle for a minute the guy comes back in the scene and again and starts to rub his hands up and down her body again. She resists when she feels him touching her. He then hogties her and tells her he has to go get the car ready and will be back in a few minutes. Chrissy asks, “What are you going to do to me?” He tells her to stay put and don’t fight it. The guy then leaves the room. Chrissy hears him leave and starts to frantically work at her ropes. She looks around blindfolded for a moment to sense if she can hear anyone then reaches back and works to untie her hogtie and feet. After she gets her feet untied she gets off the bed and tries to make her way to the door. Her hands are still tied behind her so she can’t remove her blindfold. She is just trying to sense her way to the door to escape. As Chrissy searches her way toward the door the guy quietly slips back in and shuts it. He watches for a few seconds as she feels for the door. As she attempts to open it the guy forcefully grabs her from behind again putting a hand over her mouth. Chrissy is completely freaked out taken by surprise. He then picks her up into a cradle carry and tells her in a menacing voice, “We are not leaving yet. First I am going to tie you down.and I am going to tie you down good!” He then throws her on the bed and the scene fades out. Fade back in and we see two ropes lying on the bed which appear to be tied down to legs at the foot of the bed. Then the guy puts Chrissy on her knees and loops a rope a couple times around her neck. Then he puts her face down on the bed and brings her arms up behind her tying the rope around her wrists so they are secured to her neck and she cannot lower them. Then he turns her over on her back and ties each of her ankles down to the foot of the bed. He then takes another rope and ties her ankles to each other locking them in place really tight! Chrissy is now tied down and very helpless! A lot of the fight has gone out of her now so she is just begging and pleading through the gag for him to please stop. The guy again runs his hands slowly all up and down her body. When Chrissy asks him “What are you going to do to me?” the guy forcefully clamps his hand over her mouth. The guy smiles, takes some duct tape, and quickly applies a few pieces across her mouth over her cleave gag. The guy strokes her body briefly again as she resists. He unbuttons her shorts and starts unzipping them as her whole body tightens up pulling against every one of her bonds. His hand starts to move under her shorts as Chrissy screams, “NOOO!” through her gag and the scene fades out. 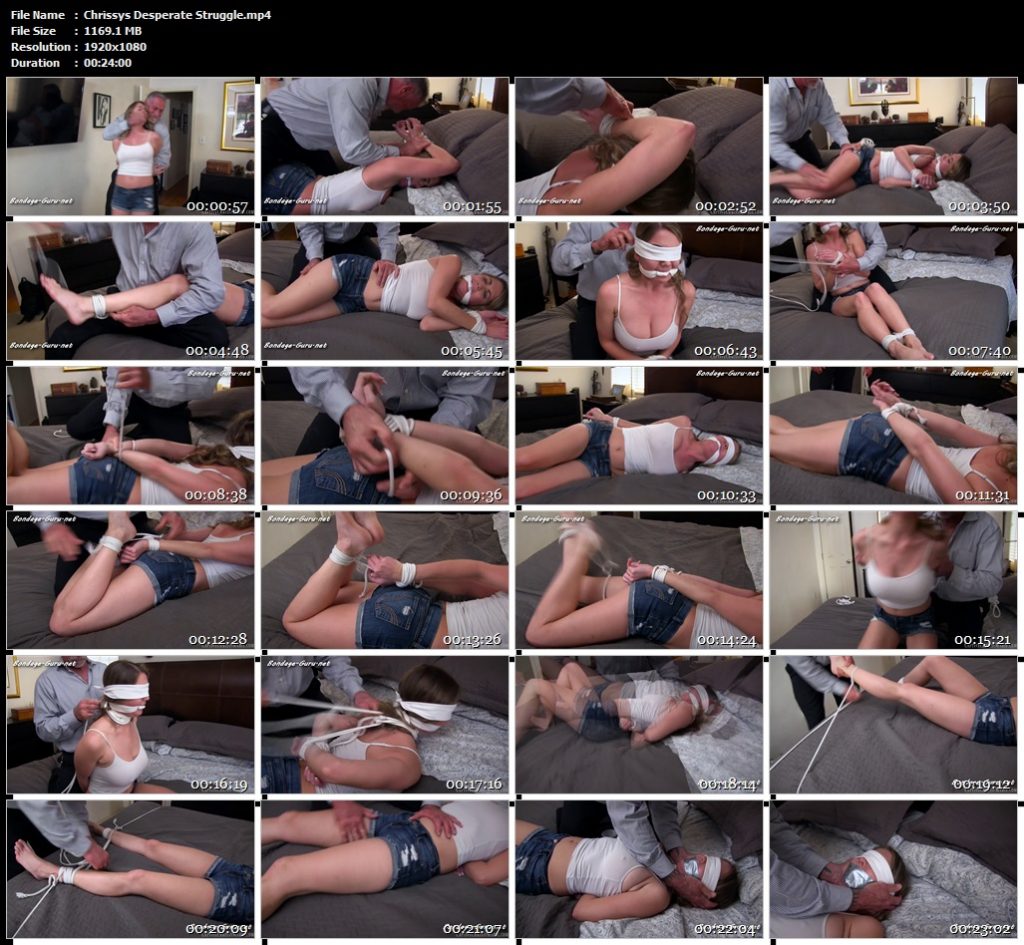