Chrissy Marie wakes to find herself in a dark terrifying place. She is wearing a very sexy outfit. There are skeletons, skulls and body parts around her. Someone or something is watching her. We can hear it breathing. It does not sound human. It approaches her and we see Chrissy Marie as if through the demons eyes. He looks her up and down slowly. Chrissy Marie looks to see a terrifying sight. She is the captive of a demon. The demon gets close to her. Chrissy Marie tries to move but she is stretched out tight like a rubber band about to pop. “Another human female to torture” he says, then calls to his helper “Egor come”. Egor is hideous, has a hunch back and a bum leg so he drags his bum leg as he scrambles to the demon’s side. “Oh my god” Chrissy says upon seeing Egor. “Oh Master, she is beautiful” Egor cannot control himself. He grabs Chrissy Marie’s breast through her top and starts to lick her tummy. “Get off me you creep!” she says. Egor stops. “Master, she called me a creep”. The demon replies “Yes she did.Go get me something sharp”. Egor drags his bum leg across the room out of sight. He returns with a menacing looking dagger. Chrissy asks “What is this place? Why am I here?” to which the demon replies “This is hell.and you are here to be tortured for all eternity for your sins”. Chrissy pleads with the demon “I shouldn’t be here.I am innocent”. “We’ll see” he says then slides the point of the blade just a couple inches under Chrissy Marie’s tight crop top and cuts a small cut in it in the center. He repeats that until her top is almost cut in two right down her front. With each cut Chrissy Marie’s gasp become louder until finally there is only an inch or less holding Chrissy Marie’s top together. He finally cuts the last part then throws the two sides away from her exposing her beautiful breasts. He uses the blade to toy with her. He runs it down her sides, uses the point to poke her tits and nipples, all the while Chrissy Marie gasps and moans fill the room. He removes the rest of her shirt throwing it aside and resumes playing with her. “Egor, bring me the flogger!”

Egor returns with a flogger handing it to the demon. But the demon refuses it. “Egor, flog her tits”. So Egor starts flogging Chrissy Marie aiming directly at her tits. As Chrissy Marie moans and gasps the demon looks on and laughs an evil laugh. This goes on for a while. Then Chrissy starts to beg “Stop, please stop. Don’t whip my tits. I can’t stand any more”. So Egor stops. The demons asks him “Why did you stop?” to which Egor replies “She is so beautiful Master”. The demon orders Egor to continue in a stern voice. While Egor hesitates the demon cuts away Chrissy Marie’s short skirt. Leaving her only wearing her sexy panties. He takes the flogger from Egor and resumes the flogging, questioning Chrissy Marie, “Do you wish to tell us why you are here? You must know what you’ve done?”. Chrissy insists “I’ve done nothing to be here! Stop, please stop, don’t whip my tits! My nipples are burning!” But the demon, because he is a demon, continues. “Stop. No more, my nipples are burning, my tits are on fire!” Then the demon to her surprise stops. He grasps her nipples between his thumb and forefinger pinching and pulling them. “Your nipples are burning? I think Egor can help with that. Egor!” Egor dragging his bum leg shuffles off and returns with ice in a container along with a candle and tongs. Who knew they had ice in hell? “Egor, cool her off” the demon orders. Egor uses the tongs to hold a piece of ice just above Chrissy Marie’s nipple and the candle to melt the ice dripping ice water on her. He takes turns on the two going back and forth. Then he applies the ice directly on her holding it in the tongs. He concentrates the ice on her tits and nipples but doesn’t spare the rest of her roaming her now almost naked body with the ice. As the ice melts away in the tongs the demon takes the tongs from Egor. “Tell us your sins” he demand but Chrissy refuses. So he uses the now empty tongs to pull and pinch Chrissy Marie’s nipples. Chrissy Marie gasps and moans as he takes turns with each one. “One last chance before we turn the heat up!” But Chrissy Marie remains silent. 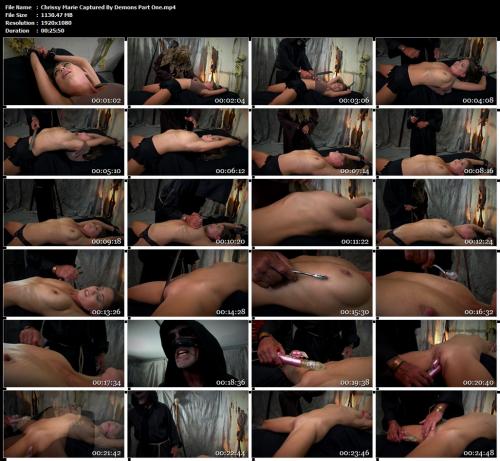