Someone is knocking at Jim Hunter’s door. He opens it to a super sexy blonde. The gorgeous busty bombshell is in trouble because the engine of her car stopped while she was on the way to a very important party. She is exhausted and sits on the couch trying to explain to Jim the problem of her car. Jim is very kind and says he will do his best to help get her car running. He goes out to the garage for some tools as I am coming home. Do you know who that is Jim? That’s Carissa Montgomery – the daughter of the most rich and important businessman in the city. We decide to take advantage of this situation and *nap the rich man’s daughter. I welcome Carissa and offer her a drink. Of course I put a drug in the drink and after a while the groggy Carissa falls asleep. The poor girl wakes up in the bedroom still fully dressed, but horribly hogtied on the bed with miles of ropes from her painfully joined elbows to her ankles completely fused to her wrists. She asks what is happening and she begins to panic with tears rolling down her face. Jim forces a ring gag into her mouth and adds many layers of duct tape tightly pressed over it. He calls the daddy for ransom and takes some pictures of the t0rtured girl to send him. Jim decides to spend the night in the bed to keep an eye on our prize and I retire to the couch. After some hours of laying next to the big tit bombshell Jim gets excited looking at the trembling and moaning girl and starts to tease, touch and manhandle her. He pulls down her dress pulling out and exposing her massive tits and applies clover nipple clamps to them. I hear noise and without warning I enter the bedroom. What the heck is going on Jim? I am furious and jealous so I kick to punch him. Jim overpowers me and drags me into the livingroom. He ties my arms and legs with thin twine which digs deeply into my flesh. The pain is excruciating and I curse him. He grabs the roll of duct tape and wraps it around and around my head muffling my noise. The next day he has to collect the ransom. In order to be sure we cause no trouble, he heavily cl-forms both of us and we fall asleep. When he returns with the money he wakes me and unties me. I go to Carissa and wonder what to do with her since she has seen both of our faces. I suggest to sell the buxom beauty to slave traders in a nearby city. I caress and fondle Carissa’s bound body .. yes my dear it is so much better for you to go to the Middle East rather than having us dispose of you. Carissa sobs and moans from both the painful brutal bondage and from knowing that her fate is sealed. 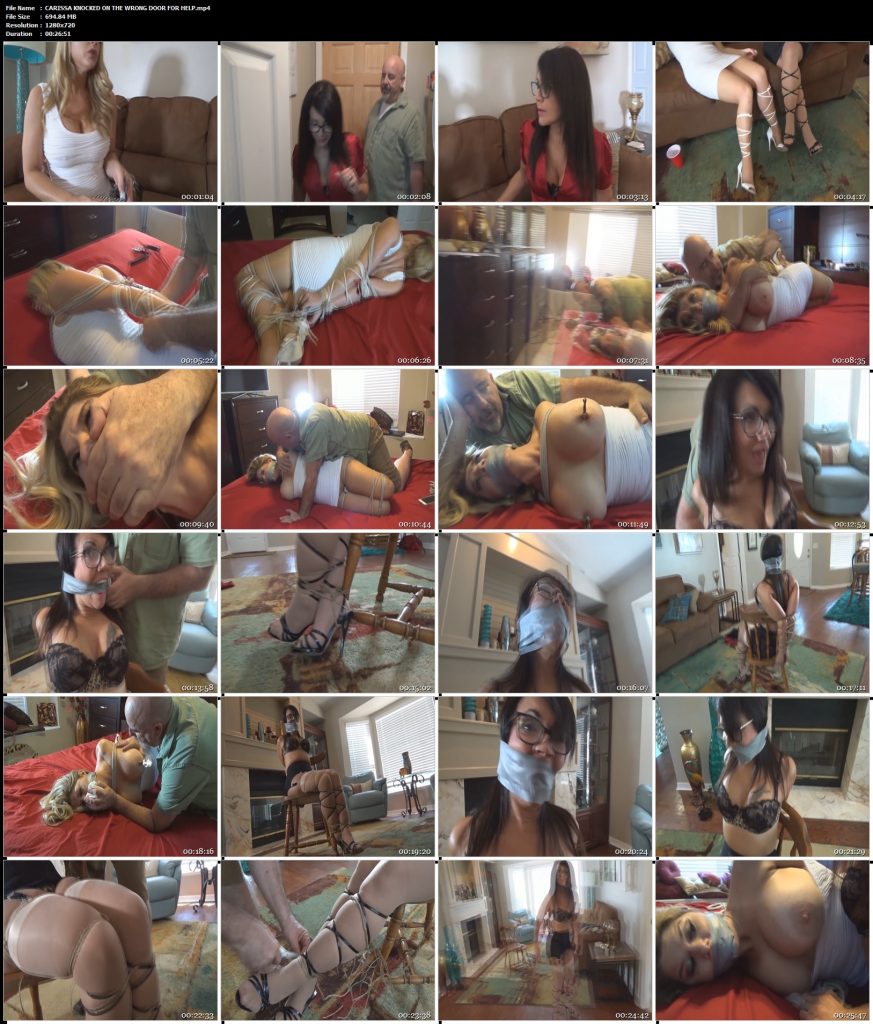