Chrissy arrives home from a long hard workout as she’s chatting on the phone with one of her girlfriends about going out and hitting the bars later that evening. She sits down on the couch and begins to remove her Reebok high top sneakers. she’s been looking forward to freeing her feet from those thick sweaty slouch socks! She tells her girlfriend that she’s just going to take a quick shower and will give her a call when she is ready so they can meet up for drinks. She hangs up and finishes removing her socks before walking out of the room. completely unaware that there is an intruder in the house that has been watching her this whole time! Later Chrissy returns dressed in skinny jeans, a tight sweater and white ankle socks. She calls her girlfriend again as she pull on her flat leather boots and tells her that she is on her way. She hangs up then notices something out of the corner of the eye. was that. a person?! No way. couldn’t have been (she thinks to herself). She goes to investigate and suddenly muffled screams can be heard from the other room as the intruder grabs her and clamps his hand over her mouth!

Now Chrissy finds herself securely and strictly bound. her ankles, knees, chest, elbows and wrists all tightly cinched with white rope! She struggles on the floor in the living room next to her sneakers and slouch socks she had left on the floor earlier, begging the intruder to let her go and rubbing her boot clad feet together desperately trying to loosen her bonds. Then she notices her captor looking at her sneakers and slouch socks that she had removed earlier. Realizing what he might be thinking she begins to plead “No. Please don’t gag me! I promise I’ll be quiet!” But of course this only encourages him even more to do just that! He slowly stuffs a whole slouch sock into her mouth until it’s fully packed to the brim then brutally wraps duct tape around her head and mouth to seal it in! Now that she’s effectively silenced by the thick heavy gag shoved deep in her mouth he can get back to business! Chrissy struggles furiously as she desperately tries to escape from her horrifying predicament. A short while later her phone rings. and she knows it has to be her friend who is expecting her. She frantically tries to make it to the phone but fails to get there in time. and before her captor catches her in the act! He quickly and decisively wrangles her into strict hogtie to further restrict her movement so that she can’t get into trouble again! As he leaves he says that someone will eventually find and release her. but that doesn’t keep Chrissy from imagining what would happen if no one does! How long can she really survive being so severely bound and gagged like she is?! She vigorously struggles and squirms around on the floor to no avail. She can hear her phone ringing again and she knows it’s her friend again but it’s hopeless, she just can’t get to her phone. She moans into her gag, exhausted and defeated, as she lays her head down onto the ground. right next to her high top Reeboks that she left behind earlier! 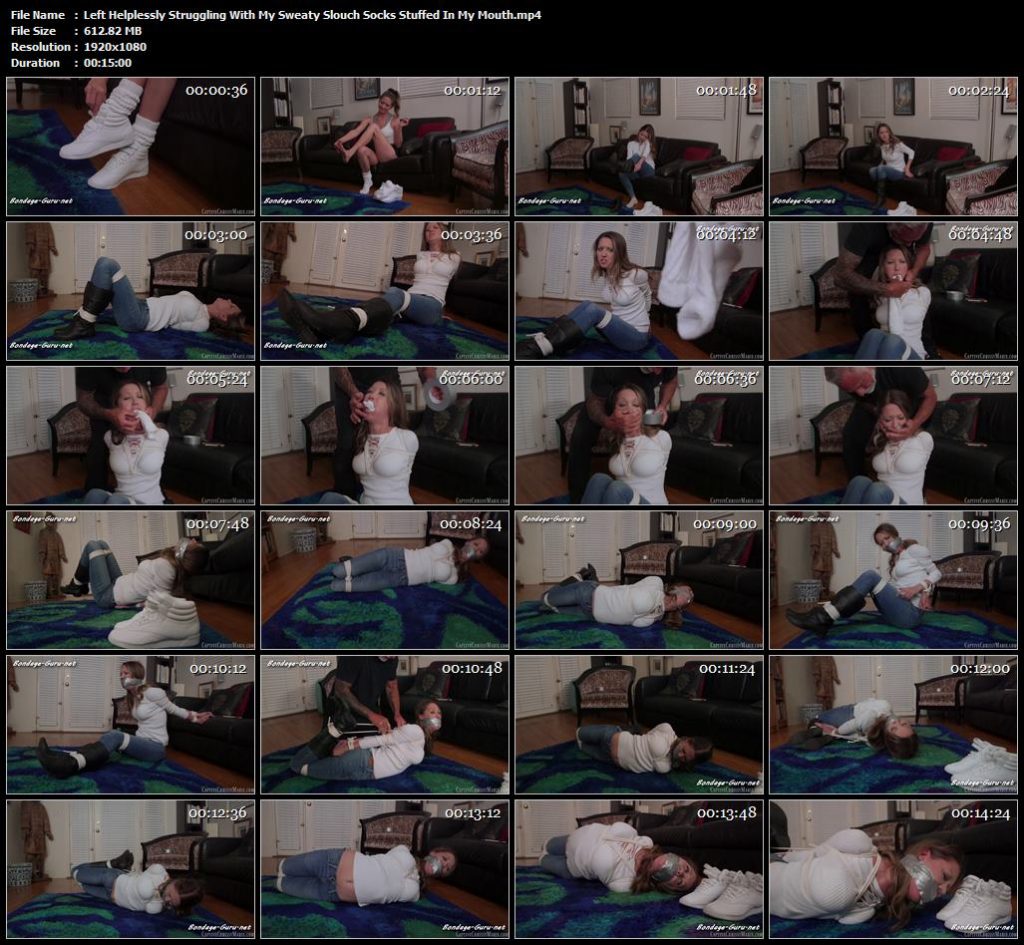