Chrissy is a catburglar dressed in a tight catsuit, knee high leather boots and long black gloves. She is sneaking her way in to steal bank account data from several wealthy businessmen. During her data extraction she is compromised and captured by an awaiting guard. Chrissy is taken to a cell where she is heavily bound and held captive as a prisoner of the facility in shiny PVC booty shorts and fishnets. Chrissy is initially frightened about her captivity and does everything that she can to try to escape but is unsuccessful in her attempts. After several gag changes Chrissy begins to come to terms with her captivity and starts to enjoy being a tightly and helplessly bound captive. She is silenced with a mouth filling microfoam wrap gag and begins to express her bound enjoyment more and more as she grinds her hips into her tight crotch rope. 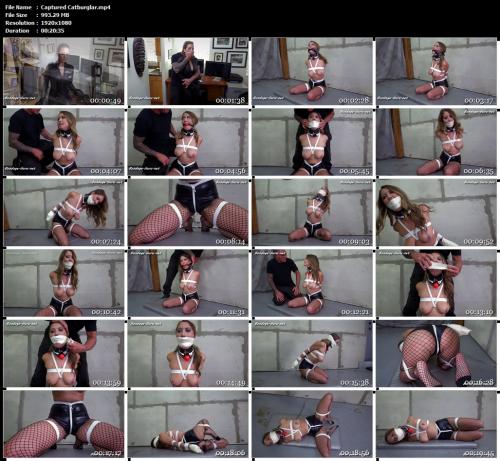