When Chrissy’s boyfriend revealed his kinky bondage fetish he never expected she would be so ready and willing to try it out! She quickly found that she loved the feeling of giving up control and also being fully taken and used while helplessly bound and gagged! Today she has agreed to try out a new kinky fantasy that is sure to fulfill her need to be desperately distressed! So now Chrissy finds herself wearing nothing but her sexy garter and stockings, bound and ballgagged on the bed, fully exposed and vulnerable in the submissive spread eagle position Another rope around her neck further restricts her movement. She wriggles and writhes, testing her bonds and looking rather excited about her ‘predicament’. He begins by caressing her naked body…squeezing her breasts and lightly pinching her nipples till they stand at attention. Her strokes her thighs and his hand moves toward her smooth shaved pussy. Barely touching… he likes teasing her ad watching her squirm with aroused anticipation. Then he starts to get rougher, pushing her head down into the pillow, giving her the kind of domination she craves. This leads into the main focus of their session tonight as firmly clamps his hand over her mouth and nose, taking away her ability to breathe. This both excites and scares her… both of which turn her on! The desperation in her eyes intensifies until he releases his hand and she frantically gasps for air. He keeps repeating this, each time he restricts her breath longer and longer and Chrissy is really starting to panic. Her thrashing around on the bed as she struggles against her bonds only makes her situation even more desperate. Her struggling begins to slow but he still persists, but then all of a sudden he realizes that she’s stopped struggling completely but all it takes is a couple of slaps to the cheek bring her around. He goes back to groping her supple body then decides to try out a special too that will truly test her ability to withstand pain. He pulls out an electric taser wand and displays it to her. He demonstrates it’s shocking power by flicking the switch. It makes an ominous zapping/crackling sound that scares her to her core. She struggles to get away and frantically pleads for mercy through her gag but he proceeds to ram it into her abdomen causing her body to convulse. After a couple seconds he pulls it away, giving her a short break to recover before repeating the electro torture. Chrissy’s eyes soon start to glaze over. He grabs her by the face and checks her eyes…still there… he contemplates if he should stop now… but Chrissy has not said her safe word so he can only assume that she wants him to continue… and so he does until her body is completely limp with exhaustion. He again checks her condition… still responsive. That’s enough torture for one night. Now he decides to reward her and inserts a small bullet vibrator into her pussy and tells her he’s going to go make himself a drink while she enjoys herself. Chrissy squirms, writhes and quivers as waves of pleasure consume her, moaning louder and louder, straining harder and harder against the ropes as she climaxes… then suddenly she realizes that she can barely breathe! All of that struggling and straining has caused her neck rope to tighten and now she is stuck in quite a perilous positon! She breathlessly attempts to call out for help as she frantically squirms but to no avail considering she is still gagged! She desperately gasps for whatever air she can get but it’s not enough… her struggling getting slower and slower as she becomes to weak to fight… all the while the bullet is still vibrating inside her… she can only hope her boyfriend returns in time to free her and save her before it’s too late! 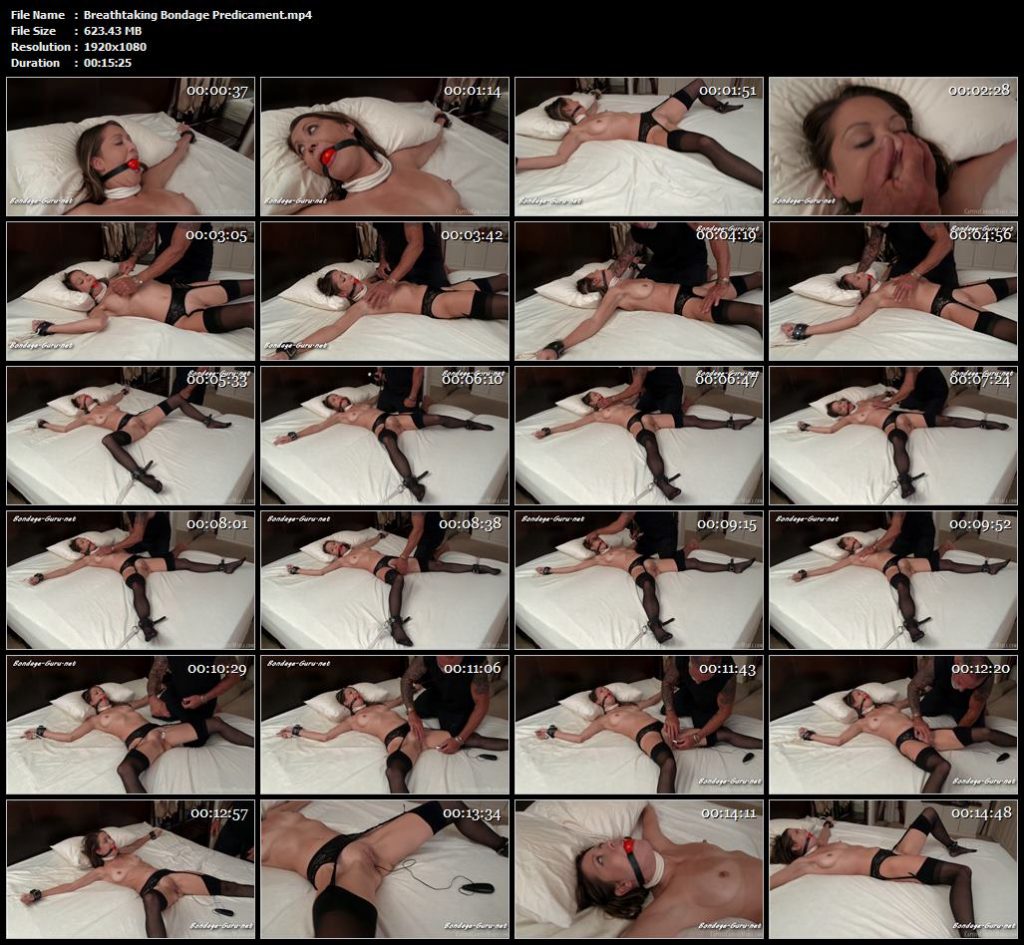 Chrissy’s Past Caught Up With Her! HD – Captive Chrissy Marie