Chrissy Marie is a very strict professor who has been known to fail many students throughout the course of her career. On the weekends she likes to wear tight blue jeans and her favorite black platform boots. One day she is grading some papers when all of a sudden she hears a knock at the door. She answers it and it’s one of her students. He is upset that she failed him. She tells him that it’s not her problem and there’s nothing she can do. He doesn’t like that answer so he grabs the professor and handgags her to her surprise. She tries to scream and call for help as he wrestles her down to floor. Then he pulls out a big roll of silver duct tape and starts to tape her up. He tapes her ankles together real tight so she can’t run away. Then he tapes her knees very tightly as well. The professor furiously struggles and tries to get her feet loose, all the while bitching and throwing insults at him. She demands to be untied but he just keeps going, taping her wrists together behind her back. When he’s done he stands and laughs at how silly she looks and how she can’t escape!

The professor then starts yelling for help and he quickly grabs the tape and threatens to shut her up. She acts cocky and tells him that “not even tape could shut me up!” He then starts to wrap the tape around her mouth and head very tightly! She did not expect this and angrily bitches at him through the gag to stop and let her go! Instead he goes off screen to search for any valuables that she has in the house, leaving the professor there tightly bound and gagged! She struggles and tries to escape, gag talking to herself about the terrible situation she is in. She tries her hardest but doesn’t manage to escape before the student comes back. He tells her he’s going to head out before anyone else comes and that she better change his grade or else next time it will be much worse for her! She yells at him to untie from her under her gag but he doesn’t listen. He then leaves her there helpless and humiliated. We see some more struggling and escape attempts from the angry professor. Towards the end she finally manages to get her wrists loosened up enough to break free. We see her quickly untying herself and then she removes her gag. She walks over and sits on her couch, visibly upset and humiliated that this happened to her! 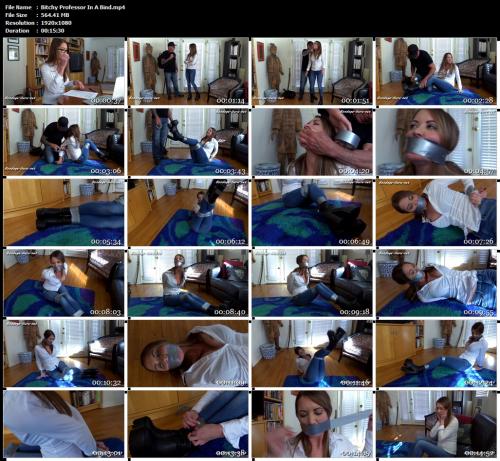