Chrissy finds herself in quite the bedroom bondage predicament! Her legs are tied spread apart and her arms are stretched over her head and tied down to the bed behind her. She can squirm and struggle but there is no way she can free herself from the tight knots that are all out of reach. Chrissy is also blindfolded but has not been gagged yet. When she hears her captor approaching she tenses up in fear. He starts to grope her all over as Chrissy tries to resist and pull away but she can’t escape his wandering hands. She begs him to let her go but he has no plans to do that anytime soon! He ball gags her to keep her quiet and leaves her alone. Chrissy helplessly struggles and mmmpphhs in distress and can’t stop herself from drooling with that big red ball gag in her mouth! She has no idea what the man plans to do to her and hopes someone will come to her rescue before she finds out! 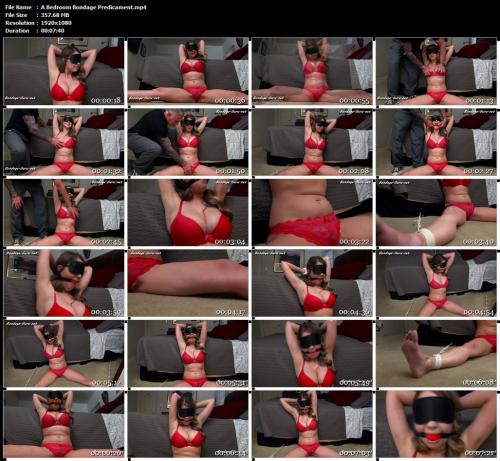