Chrissy is an 80’s girl wearing blue skinny jeans, a neon tank top, hooters slouch socks worn over her jeans and reebok high top sneakers. She just came home from a shopping trip and puts her bags down and sit next to them with her legs pulled up on the couch cushions. She thinks that she is alone so she starts rubbing her legs and feet. She says “I have some time until my boyfriend comes over, I think I will have some fun by myself. Just let me take my Reeboks off” But before she can undo the first Velcro strap, a man who followed her home from the mall clamps his hand tightly over her mouth. She is surprised and a little scared, but can’t help but be excited about this. He warns her not to scream and she won’t get hurt then takes his hand away from her mouth. Then she smiles and asks him “are you going to tie me up?” He puts his hand over her mouth again and asks if that is what she wants, and she mmmphhhs wildly as she nods her head yes. Hand still over her mouth he pulls her off the couch and into the next room where he plans to tie her up just like she wants!

Next we see Chrissy with her hands already tied behind her, elbows tied together tightly, chest harnessed and knees bound with all white ropes. She struggles for a few seconds then tells him while smiling “This is good, but I think you can add more rope. Tie my feet together!” He comes in and ties her feet together. While he is tying her feet, she asks him “Do you like my Reeboks?” and he says “Yes, they are the reason why I followed you home”. She tells him she loves them too. After he ties her feet he goes to leave but she tells him he’s not done! “I can still scream for help, you better gag me too!” As he comes in to gag her she tells him “You know, before you came in here and tied me up, I was going to have some fun. After you gag me, will you tie a crotch rope on me and let me have my fun?” He agrees and proceeds to stuff a pair of ankle socks into her mouth then takes a thick white cloth and cleave gags the packing into her mouth. Chrissy struggles excitedly like this for a few minutes until he comes back in more rope. She giggles through her gag when she sees him because she knows her crotch rope is coming. He ties the crotch rope on and attaches it to her wrists so she tugs on it when she struggles. He leaves again and she starts writhing on the floor, getting more and more excited with every hip thrust. Later he comes back in with more rope and puts her in a very strict hogtie. This is the finishing touch that puts her over the edge. She struggles and moans in pleasure from the strict bondage and climaxes from her tight crotch rope! 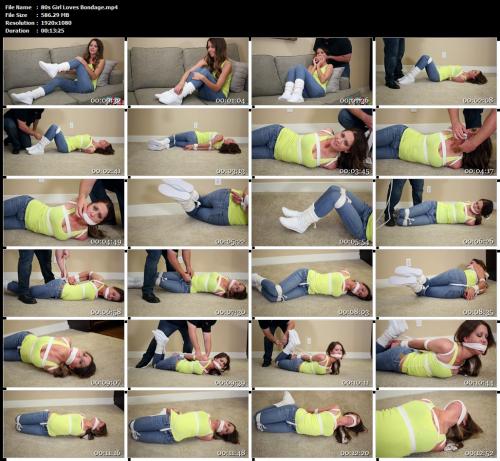