Brat twins Nyxon & Luna Dawn are out past curfew again, and their mother, MILF Gigi, is furious. She’s up waiting for them as they sneak in the door, and they’re both startled to see their mother sitting on the couch. Gigi tells the girls to sit on the couch with her for a minute, and reluctantly, both girls do. Gigi proceeds to tell her bratty girls about how disappointed she is in them, and that this is the last time that they’re going to be out past their curfew. The girls laugh & scoff at their mom, telling her that she’ll never be able to control them, when suddenly Gigi whips out a piece of rope & starts to tightly tie Luna Dawn’s wrists behind her back. Nyxon screams, and the next scene opens with both girls chairtied & struggling. They yell at their mother & demand to be let go, but Gigi has had enough of their bratty ways, and she shoves a large yellow sponge in each of their mouths, and tightly wraps duct tape around their heads so that they can’t spit out the sponges. The girls struggle defiantly while their mother tells them that they are both grounded until further notice, and that she’ll untie them after she returns from BINGO. 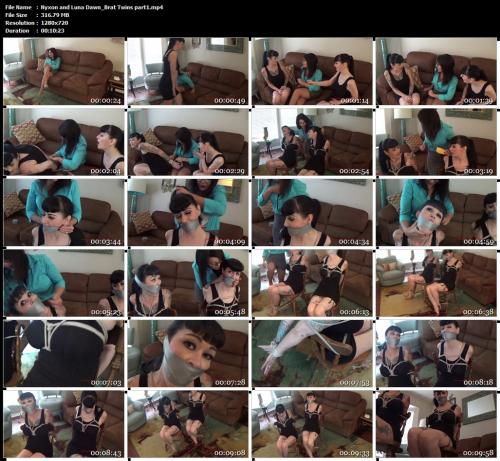