UltraGirl is in her secret identity typing on a computer. She is dressed in a blouse and short black skirt with glasses and her hair up in a ponytail. She’s also wearing suntan pantyhose and black high heels. She is doing research for a story when suddenly an alert comes across her screen. There is a bank being robbed nearby. She muses out loud, “This looks like a job for UltraGirl!” She stands up and begins to undo her blouse. As she does gas starts to fill the room. She is caught off guard and begins to get woozy. “Wha .. wha … what is this?” She says as she almost completely unbuttons her blouse revealing part of her UltraGirl uniform underneath. She coughs and gasps for air eventually falling limp on the ground. The villain walks in and fondles her legs and breasts then squeezes her face to make sure she is out. He reaches under her skirt and removes her powerbelt which was hidden underneath.

UltraGirl is now bound with rope to a chair. Her blouse is still undone and her short skirt is up enough to reveal her red shorts underneath. She wakes up and struggles against her bonds. After a minute the villain comes in and taunts her, fondling her and lightly slapping her. She is defiant throughout. “How did you find out who I was?” The villain gloats and promises to never tell. “What do you want with me?” she asks. “We just need you out of the way while we rob a few banks. After that, you won’t hear from us again.” UltraGirl glares at him and says “you won’t get away with this! When I get free of this, I’ll bring you to justice!” she says. The villain taunts her with her belt, shaking it in front of her. “You’re going nowhere without this!” UltraGirl remains defiant and is then tape gagged by the villain. He drops her powerbelt on a table across the room out of her reach and leaves laughing.

UltraGirl struggles furiously in the chair desperately trying to escape but she cannot get loose from the tight ropes without her powers. After a few minutes she glances over to her powerbelt and realizes she has to try and make her way over to it. Retrieving it is the only way she will be able to break free. She uses her feet to struggle and scoot the chair towards the powerbelt. On the way she loses one shoe … then another. This makes scooting across the hardwood floor even more difficult with her silky nylon feet! Eventually she makes her way over to the table and manages to grab the belt with her feet. She starts to breathe slowly as her powers return to her. Suddenly she manages to breaks her wrists free … then her ankles. Her strength is returning. She eventually is free from all her bonds takes the tape off of her face. She stands and goes back over to her desk. “As I was saying, this looks like a job for UltraGirl!” She pulls her skirt off, completely removes her blouse, puts her hair down and removes her glasses. Then she puts on her powerbelt. She reaches under her desk, takes her red boots out and puts them on. Once fully in costume, she stands heroically and says “Now, time to catch those robbers.” She runs outside and takes off in flight to go bring those robbers to justice! 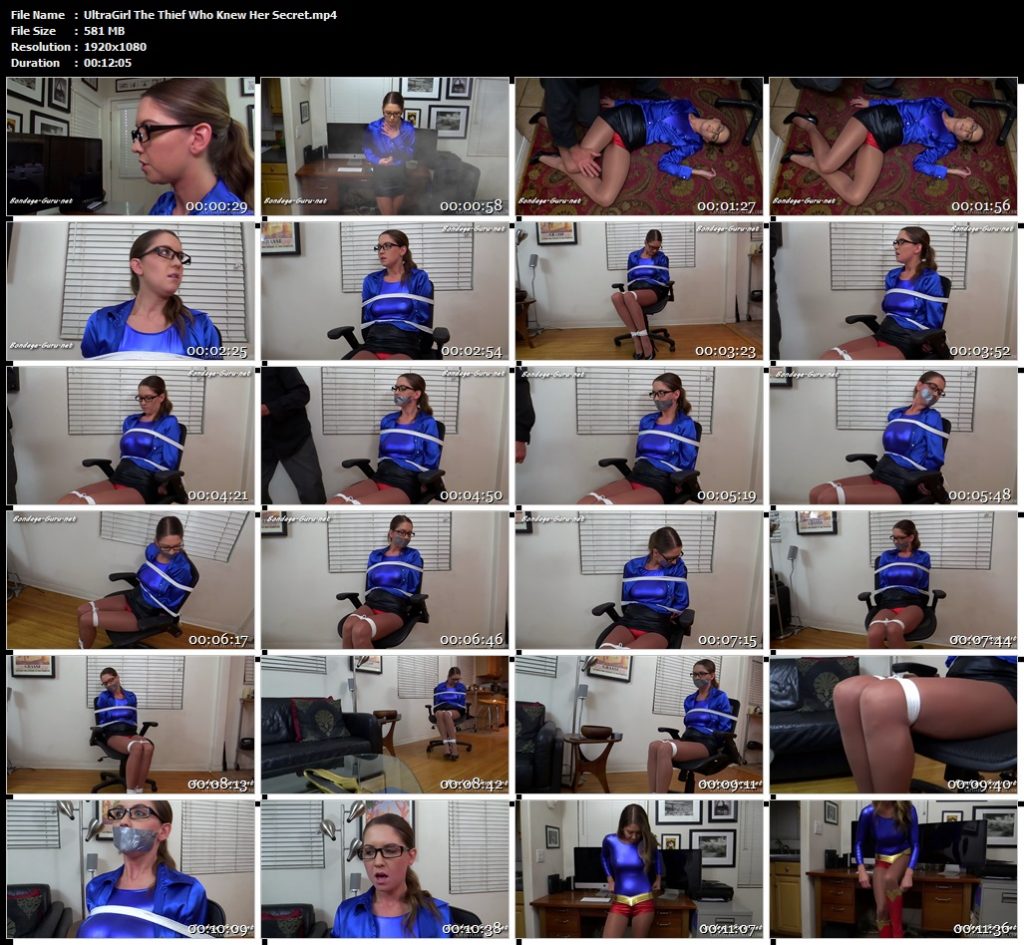 Captive Chrissy Marie – Help Me Daddy! I’m All Tied Up!