Jamie is a dominatrix who is paid to make submissive men’s fantasies come true. Today some new guy has come to her lair. She has given him instructions on what he has to do. But this guy is different. Because he came here believing it was going to be the to other way around and he would be the one in control. Jamie is furious and demands that this guy either submit to her or leave. But then he walks in with her rope. “No one touches my rope but me!” Jamie tells him. A short time later, Jamie finds herself tied up tight. “I tie you up! No one dares to tie me up!” she tells him. Jamie then goes on to make threats of what she is going to do to this guy if he doe’s not untie her. This gets her ball gagged and because it is something she is not used to, she starts to drool all over herself. Later things get worse when the man ties her down to a chair with her legs spread apart. He also stuffs and tapes her mouth with panties. Finally he really humiliates her when he pulls her big boobs out of her dress and leaves her like this. Sometime later, there is a knock Jamie’s door. It is her next client showing up for his session. 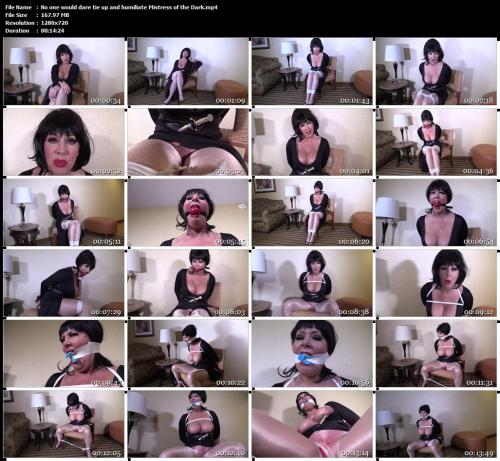