NEW BONDAGE MODEL NIKKI MATSON! In Part 1, hot Moms Nikki Matson and Natasha Flade are barefoot on the bed. Nikki is is shorts and a camisole while Natasha’s bedclothes are a pair of sweat pants and a tight tank top. The two MILFs are laughing and chatting while their sons are elsewhere in the house. Natasha had invited Nikki’s son over for a sleepover. Redhead mom Natasha was telling the busty, brunette Nikki how her son has been wanting to play these robber and tie-up games recently. Nikki exclaims that her son has been doing the same thing, too! They laugh and agree that their sons’ games are innocent enough and, in fact, they suspect the culprit is their sons’ friends who can’t wait to see two sexy moms all tied up and gagged. As Natasha is recalling a tale of her son coming in one time, pretending to be a robber, Nikki noticed that the boys had entered the room. It’s their sons wearing masks and carrying toy arms. The two moms pretend to be scared at these “bad robbers.” They put their hands up into the air as they’re ordered and ask with damsel expressions, “What’s going to happen to us?” They were ordered by these “robbers” to get onto their bellies and cross their hands behind their backs. Nikki and Natasha go along with their game and both wound up bound hand and foot, barefoot on the bed. They play along and roll and wiggle about, and even try to escape and get loose from the rather tight knots their boys have tied. Now, in part two, their sons come back and inform their moms they’re making too much noise, so they’ll have to be gagged now, too! The ladies try protesting, but they’re not successful and next thing they know, they’re both cleave-gagged! “I can’t believe those little brats gagged us!” Natasha exclaims in gagtalk, very much annoyed. She thinks her son’s skills are getting rather advanced. Hmmm…. But these playful moms are good sports, so they go along, playing up their roles as bound and gagged damsels for their boys. Their sons have tied those knots pretty tight and the women are thinking this game should end soon. Since no one seems to be coming back to untie them, they decide to try to get each other loose. As Natasha is trying to untie Nikki’s roped-up wrists, their sons come back and catch them! Nikki protests that they weren’t trying to get away, but their boys don’t buy it one bit! They inform their moms they obviously need more rope. “What? More rope?” Natasha says with a look of real surprise on her face. “No, we’re being good!” Nikki chimes in. But their sons don’t listen and both Nikki and Natasha wind up hogtied on the bed. “I can’t believe this!” Natasha mmpps again in great gag talk. She’s going on and on about these two boys. What are they going to do with them?! The two hogtied MILFs mmph, struggle and roll about, with lots of closeup shots of their bare feet and especially their perfectly lovely soles! Well, after playing along for quite a while, our moms have about reached their limit on how much fun this “robbers” game is for them, but they still go along with the shenanigans. They can’t move around nearly as much now, since they’re tightly hogtied and cleave gagged with thick silk scarves, but they try and in the process, we get even more closeups of their gagged faces and bare soles. These are some damn lucky sons to have moms that play these bondage games with them! Natasha and Nikki try really hard to escape their sons’ bondage, but the brats placed those knots where they couldn’t get to them and tied those ropes pretty tightly! Just when they’d about given up hope of ever getting to bed and decided they may as well just go to sleep even though they’re still tied-up, their boys finally return. This time, they’re pretending to be cops who’ve arrived to rescue them! “Thank God,” Natasha whimpers, worn out. “Someone is here to help us!” Yes, ma’am! The “officers” are here to save the day and rescue these two damsels! As an added bonus, there’s a few bloopers and outtakes at the end of this video clip, too! 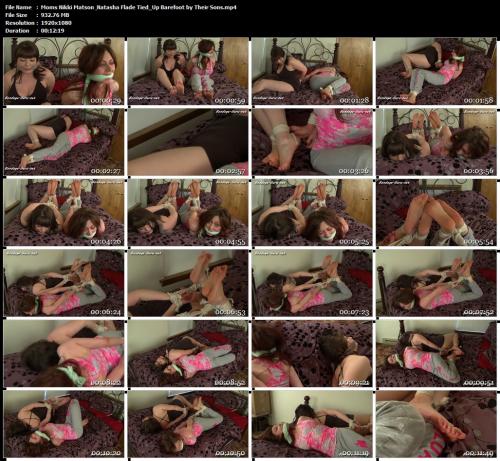