Mom Natasha Flade’s son has some of his friends over. Barefoot and wearing denim short-shorts, MILF Natasha knew that all her son’s friends think she is the super hot mom! All the boys wanted to play thieves and rob this helpless housewife’s place. So Natasha’s agreed to let herself be tied up to the dining room table leg as part of their game. Now here she is, seated on the floor, her hands tied behind that dining room table leg, with chest ropes bound above and below her breasts, her thighs tied above the knees, and her ankles crossed and roped tightly. Her bare feet and beautiful soles are sticking right out at YOU! Judging by the rope work, Natasha gets the feeling that these naughty boys must play this game a lot, as she’s feeling she’s truly at their mercy! Once these “robbers” have her all roped up, they leave the room to go about ransacking the house. Except one boy, John, who says he has to stay and keep an eye on her-he’s “guarding” the captive! As our redhead mom sits there tied up on the floor, Natasha can’t help but notice that her guard can’t keep his eyes off of her feet. She smiles coyly and calls him out on it, “Hey, I see you! Are you staring at my bare feet? Don’t worry, I won’t tell anyone.” John turns a dark red shade of embarrassed. Amused, Natasha teases him a little more, and even starts wriggling her bound bare feet right at him. She even kicks them high up into the air – what a barefoot tease this mom is! Then John announces that he has to gag her so she’s doesn’t break her promise about not saying anything. Natasha sighs, then replies, “Gag me?! Well, I guess I deserve that for teasing you.” Next thing she knows, she’s been cleave gagged with a thick, black scarf between her lips. But she doesn’t stop giggling behind her gag – or teasing the poor boy with her beautiful, tender soles. Eventually, her son and his other friends return. They’re surprised to find that their captive is now gagged, but they like this development, and tell her so. Natasha tries telling them the “guard” has gagged her! But she’s also flattered by the adoring attention, so she gives them all a little damsel a distress show, struggling and mmphing into her gag. After a while, our hot, redheaded mom decides it’s time for this game of theirs to be over. She informs them in gag talk that they need to let her go. So they come over and ungag her. But as soon as they do, Natasha can’t help but start to ousting John’s little secret that he’s infatuated with her feet! She doesn’t get too far, though, before she’s silenced with a handgag! Oh no, John isn’t letting his naughty barefoot fetish secret out! 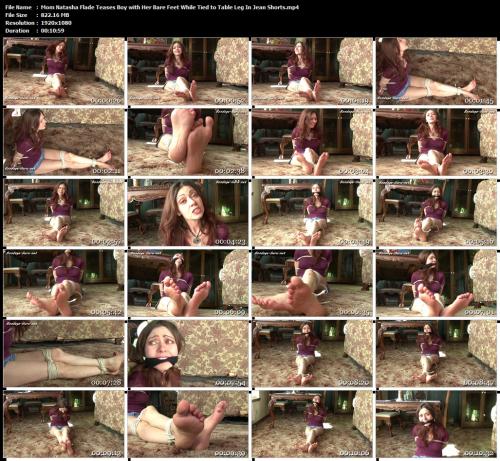