Chrissy and Star come home from class to discover an intruder in their apartment! They put their hands up in fear and beg him to just take whatever he wants and not to hurt them. He will take whatever he wants but he also has other plans to keep them out of his way. He hands them a roll of duct tape and ‘tells’ them to tape eachothers mouths shut. They reluctantly obey his orders. Then he pulls out a whole lot of handcuffs and hands them to the girls. They look at him in shock when they find out what he wants them to do with the cuffs. He has Star go first, slowly cuffing her ankles with a pair of hinged cuffs, then cuffing her hands behind her back with another pair. Then he orders Chrissy to take a third pair and hogcuff Star. Chrissy really doesn’t want to do this to her friend Star but she does as she’s told. Then he has Chrissy cuff her ankles and wrists the same way that Star did, then challenges her to hogcuff herself. Chrissy doesn’t think this is possible but somehow manages to succeed. Now that both girls are tightly bound and gagged the intruder can rob them and make his getaway without them getting in his way. Chrissy and Star struggle desperately to get free but quickly realize there is no way to escape from the strict metal restraints. He also didn’t leave a key so they are truly helpless and worried about how long it will be before someone realizes they are missing. Hopefully someone will find them before it’s too late! 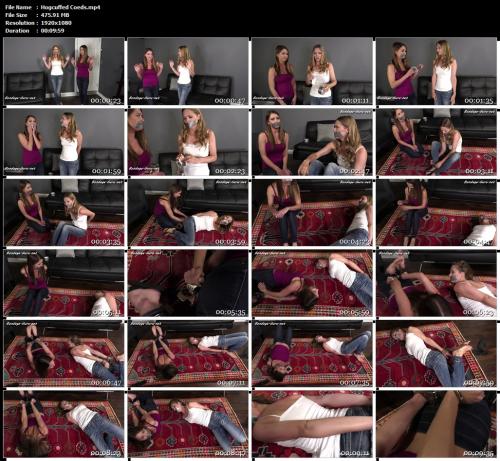 Too Much Tape To Escape! – Captive Chrissy Marie