Cadence has been tricked and held captive by her girlfriend’s evil twin sister. Cadence struggles on the bed while she is tied spread eagle and ballgagged, drooling all over herself. The evil twin saunters her way into the room totting a flogger and begins beating Cadence with it while laughing at her for falling into her trap. She whips her for sometime but with pain comes pleasure-the evil twin brings out the hitachi and vibes Cadence into multiple forced orgasms until Cadence can’t take anymore. She leaves Cadence with a kiss as she leaves her to struggle on the bed.
Cadence is still in her spread eagle predicament when Dixie, her girlfriend, busts into the room. She curses her evil twin as she takes the ballgag out of Cadence’s mouth to get some answers. As Cadence spurts off the awful things the twin did to her, Dixie can’t help but just want to make out and kiss her girlfriend’s body who is oh so vulnerable. Dixie climbs on top of her and grinds her pussy into Cadence’s leg while rubbing Cadence’s pussy until she’s cumming at the mercy of her hands. Finally Dixie unties her girlfriend and they embrace while making out and fingering each other’s pussies. Cadence forces Dixie to lay gown, she gets on top of her and they grind their hairy pussies and choke each other until they are both screaming and out of breath. Cadence drops down on top of Dixie and the girls passionately make out. 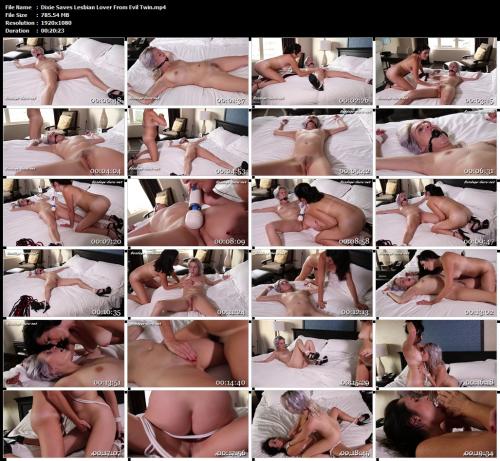