Annabelle is baby sitting tonight and she is very bored. So she talked the boys into playing a game. You see, Annabelle is very much into bondage. She figures these guys don’t know too much about these kind of things and what would it hurt to teach them something new. It’s not like she is going to take off her clothes like she would with her boyfriend. Sometime later, Annabelle finds herself tape up and very surprised. She didn’t expect these guys to learn so fast and be good at it. So good that she cannot get loose and also so good that she is getting very turned on. Left alone she works her way over to her cell phone and and calls her boyfriend. She tells him the situation and for him to get over to her quick because these guys refuse to un-tape her. But the boyfriend cannot leave for a while, but promises to call her back to see if the situation has change and to let her know he is on his way. A short time later, Annabelle is still bound and now with even more tape. Then she sees them with a pair of mom’s panties and the next thing she knows, her mouth is stuffed and taped to gag her. Annabelle squeals loud through the gag when her cell phone rings. She is unable to answer it. Things are getting really bad now as she gets more and more turned on to a point where she no longer has control. Soon she is moaning loud as she experiences another orgasm. By the time her boyfriend arrives to rescue, she will have worn herself completely out with several more. 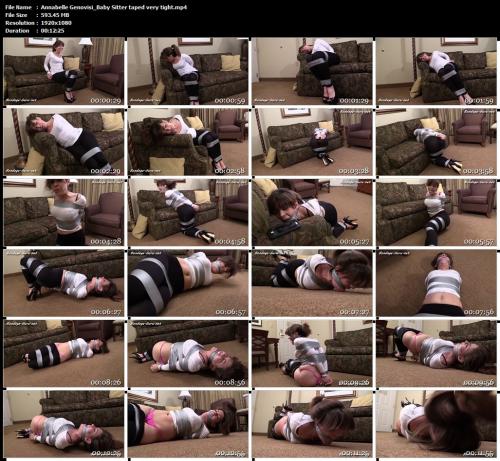