We open up where we left the REAL Chrissy in the previous video. She is still tapegagged and squirming in her white bra and panties on the bed. A fidgety Chrissy is greeted by the POV, the “Worst Collection Agent Ever”. The POV once more checks the picture of Kristall with the struggling Dr. Chrissy. Just once this time. Chrissy cannot believe that this POV is this dumb, she groans and complains beneath her gag. She’s very “huffy” as she tries to explain to the POV that this is a mistake, however, she is of course gagged. Reluctantly, the POV eventually removes Chrissy’s gag. “Oh my god, finally! Are you a complete idiot??!! Where have you been?! Chrissy says as she gets off the bed and gets in the POV’s face. Chrissy explains the situation to him about how she made another clone that tied her up and gagged her in an attempt to replace her! She pleads with him to untie her and help her get rid of her clone. The POV agrees “whatever you need, Chrissy!” and she replies “It’s Dr. Chrissy!!!” as the scene fades out.

Next we see the evil CLONE Chrissy talking on the phone with the Clone of the Director of Marketing who has escaped. Clone Chrissy is in Dr. Chrissy’s executive suite and is laying sensually on a couch dressed in a very sexy lingerie outfit, featuring stockings and garter belt. She also has a ball gag around her neck. “Yes, I took care of your host already, let’s just say she’s been transferred…permanently. I also took care of that snoopy lab assistant, Khristall, and that prude who created me.yes, our plan is working perfectly.hopefully these side effects wear off soon though. I’m horny all the time!” Clone Chrissy gets up and starts walking around the room, checking herself in the mirror (camera POV). “I’ve been looking all over her room, but there’s no cure. So I just end up gagging myself and trying on her lingerie.what do you mean there’s no cure?!” Suddenly there is a knock at a door in the other room. Clone Chrissy walks to a door to open it, but she notices the door is already open. She closes the door securely. “Hmm, only an “All Access Key” can get into this room. I wish is was the boss, which would’ve been fun!” Clone Chrissy walks back in the previous room. A moment later, Clone Chrissy spins around to face the POV, surprised to see him. “Oh, you scared me. You again?! What are YOU doing here?! Can’t you do anything right?! Oh well.do you wanna fuck me? Wait. what are you doing with that!? Hey! Stop! No..

Clone Chrissy is now properly trussed up in leather straps and a duct tape gag on the couch. She is struggling to get free when we fade in. Clone Chrissy attempts to mmmphh and plead with the POV. She is once again furious with this guy. She mmpphh’s many angry complaints, but the POV is not phased this time. He informs her that he already made a deal. Then we change angles back to Real Chrissy who just entered in a new sexy lingerie outfit. “Hello, Chrissy! I bet you didn’t expect to see me again! I think you’ve had quite enough fun!” she says to her clone as she helplessly struggles on the couch. We then change angles back to CLONE Chrissy who is looking where Real Chrissy is standing. She scowls and mmmpphh’s angrily in REAL Chrissy’s direction before looking at the POV, begging him to untie her. Real Chrissy breaks the news to her clone. “Oh no, he’s with me! And he’s going to make sure you get down to Deep Storage as soon as possible. You lose!” She turns towards the POV and tells him “let’s get this lovely clone down to storage. Then we’ll track down Kendra from Marketing!” The POV walks toward Clone Chrissy. She struggles and pleads and mmmpphhs like crazy, begging for the POV not to take her, but he does anyway!

The Real Chrissy struts into the shot in her own Executive Suite. She is tightly cleave gagged with her corporate cleave gag and wearing the same outfit as the previous sequence with some matching heels. She is of course very proud of herself. She crosses her arms and holds her head up high, then she does a cute, booty shaking dance of joy. Go Chrissy, Go Chrissy.then she stops and says “Whelp, time for me to get back to the Research Department.” then struts out of the scene.

Clone Chrissy has just been brought down to deep storage and is standing in front of the POV. She is gagged with a ball gag and is still strapped up except for her legs. She continues to hurl expletives and insults at the POV, demanding she be released immediately. “Not this time” he says. Clone Chrissy then rolls her eyes and says “Fine!”. She then tries to shift the conversation, trying to gag talk and say things like, “Well are you at least going to fuck me?!” “I need you right now!” She starts begging the POV to help alleviate the side effects of being a Clone, which is to be horny, ALL the time! After a few moments of her begging, bending over, trying to seduce the POV, he gives her a proposal. “How about this, I’ll put you in with my new friend Kristall”. Clone Chrissy is very happy to hear this and shakes her head in agreement as the scene fades out. 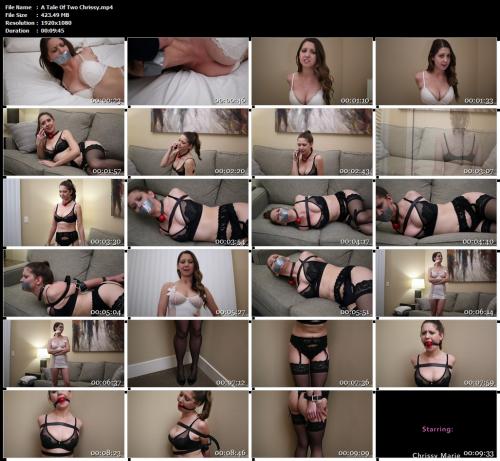