Sahrye has come to Goldie’s place with a plan to rip her off. But she didn’t count on Goldie being a professional female wrestler. So when she tries to over power her, Goldie get very physical with Sahrye and starts to beat her up. But just as Sahrye is ready to go out, her plan works and soon Goldie cannot do anything to resist. So using rope she brought along, Sahrye ties her up tight. Then Goldie regains her strength and starts to resist again. But it is too late, Sahrye has her well restrained and very helpless. When Goldie starts to threaten Sahrye, she shuts her up by stuffing and taping a larger pair of brief panties in her mouth. Now Goldie is even angrier as she struggles bound and gagged. She tries to muscle her way out of the knots, but they will not give. “When I get out of this, I am going to kick your ass” she tries to threaten Sahrye . But all Sahrye hears is a whole bunch of “mmmpphs” as Goldie grunts and whimpers through the very tight gag. Finally after she was found what she came for, Sahrye returns to Goldie and prepares her for whoever finds her.. A short time later, Sahrye is long gone when Goldie hears the male voice of her neighbor. When he finds her door wide open, he comes in to find Goldie struggling hogtied and gagged. And, to make it even more embarrassing, Sahrye has left her with her great big tits out, and with her pants and panties pulled down. 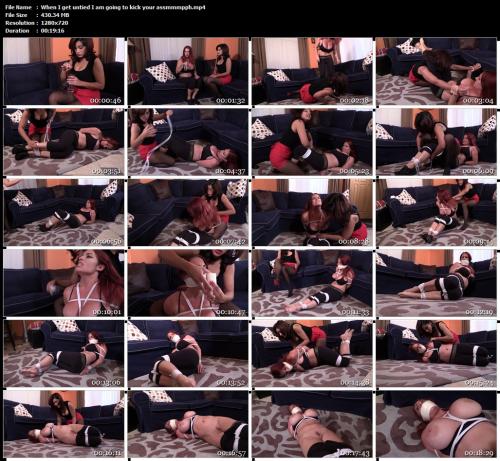