The scene opens up with Chrissy standing in front of the POV, still strapped up and gagged with the penis locking gag. Chrissy makes an incredible effort to gag talk to the POV, who is the creep who brought her down to deep storage. Chrissy is very angry at the POV for messing up! The POV holds up a picture of Khristall with a big bar-code on it, and holds it up to Chrissy to compare. Chrissy becomes even more infuriated by the fact that the POV has not figured it out yet. She’s like, REALLY!!?? So there’s a lot of loud angry “mmph’s!!!” through her gag to start. Eventually, the POV realizes he’s made a mistake and removes the gag in a quick flash. Chrissy then scolds the POV for messing up. “Are you kidding me!!?? You idiot! Do you realize what you’ve done?! You’ve got the wrong girl! Now, hurry up and get me out of this before she finds something or SOMEONE very important my lab. You really couldn’t tell the difference?! Seriously??!! Ugh!”

Meanwhile, back in Chrissy’s Lab Khristall has started snooping around. She is still wearing the same white lingerie ensemble as before and is still duct tape gagged. However, she no longer is wearing the over the mouth gag. She is just finishing taking off the nurse outfit as the sequence opens up. Then Khristall sits down at Chrissy’s computer and begins to type a few things, hoping to get some information about what’s really going on at GagMe Inc. and she finally remembers she is still wearing the tape gag and now removes it. She then finds a phone and dials up her friend to tell her what she has found. “Hey, it’s me.yeah, you’re never going to believe what just happened to me.. yes, tied up and gagged. no, not by choice this time. (split lines) This Dr. Chrissy down here is crazy! No not yet, I’m in the files now.oh here’s something.” Khristall thinks she hears a noise and pauses for a moment, but shrugs it off. “Looks like she was working on some kind of a cloning program or something? This is crazy! Oh my gosh. what happens to the person that they copied?! (split lines) It says a girl in marketing was the first one.is she a clone?! She has been acting weird. I’ll call you back, I got to get out of here!”

Khristall hangs up the phone and is about to leave when she hears something again. She stops and notices a door nearby where sounds are coming from. The door has a sign on it that reads “Keep Out! Test Subject!”. Khristall presses her ear to the door and her curiosity gets the better of her. She opens the door and walks inside. On the bed there appears to be a wiggling figure, covered with a sheet and mmph’ing. “Oh my goodness! Don’t worry, I’ll help you” she says as she rushes over to pull the sheet off the bed, but to her shock, it’s a tied up Chrissy! THIS Chrissy is wearing a sexy white bra and panty set and is tied up at the legs, arms, wrists, and also has a very tight crotch-rope. She is gagged with a tight secured white cleave gag. Chrissy immediately tries to sit up and gag talk to Khristall that she is the REAL Chrissy and begs her to untie her. Chrissy works her way to seated position then finally stands up and starts hopping around trying to convince Khristall that she should release her, while Khristall thinks hard about what to make of this. “Chrissy??!! But.I saw them take you away” she says. Chrissy tries to respond with part of her story about how it’s not really her. It’s a clone. Chrissy gets very ‘huffy’ with Khristall. “This is crazy, you just tried to send me down to Deep Storage. You tied me up and gagged me in front of the boss! There’s no way I’m taking that gag out of your mouth. Serves you right!” Khristall exclaims. Chrissy continues to gag talk about how the whole company is at risk and she’s the only one who can stop the copy, and how one girl is already missing. Chrissy becomes very frustrated that Khristall is not listening to her, hopping around Khristall as she thinks it over. Khristall finally agrees to help Chrissy. “Fine, but only because you might have the key to get out of here.” Khristall pulls Chrissy’s gag out of her mouth and starts to untie Chrissy’s ropes, or at least looks like she is for effect.

“Ugh! First of all, it’s DOCTOR CHRISSY. I didn’t spend 5 years at GagMe Academy to just be Chrissy. Anyway.Thank you, I’ve been there for hours. Listen, we don’t have much time. I’m sure my creation will be back here any minute. If she finds us she’ll catch us both and make us do all kinds of girl on girl stuff. She’s turned into a super charged sex kitten, a common side effect that happened with last girl. I think it’s even sleeping with the boss. Hurry up! Once she knows I’m free, we’re all in trouble.” Khristall stops untying Chrissy. She smiles as she learns this valuable information about what’s going on at the company. She grabs the auto tying remote nearby and pushes the gag button. “Wait, what are you doing?! No!” Chrissy barely has time to speak before Khristall pushes the button and after a quick flash the REAL Chrissy is nicely tape gagged. “Sorry Chrissy, but thanks for the valuable information! I’ll try to remember to tell someone you’re down here.” A tapegagged Chrissy tries to scream “It’s Dr. Chrissy!” Khristall pushes the struggling and very angry Chrissy back onto the bed and leaves her struggling and angrily bitching through her gag.

Khristall enters the previous room carrying the auto tying remote and makes sure to lock the door she just came from. Clone Chrissy is already hiding in the room. Khristall puts the auto-tying remote down on lab desk close to where Clone Chrissy is hiding. Khristall finds the phone on the computer desk and calls a number. When the time is right, Clone Chrissy grabs the remote, and points it a Khristall, setting it to the “Gag” mode. Khristall begins to tell her friend what’s going on “Hey, it’s me. I know what’s going on! Write this down.” when all of a sudden Chrissy pushes the button while positioned behind an unsuspecting Khristall. Khristall is once again perfectly tapegagged after the screen flash and keeps mmph’ing into the phone, trying to tell the person on the line what is going on. Khristall is shocked to find out she is once again gagged! Khristall attempts to remove the gag but the mischievous Chrissy sneaks up behind and grabs her, dragging her out of the room.

The last scene opens with Khristall tied to the bed in her black bra & purple panties. She does very little struggling to start out, as she knows she is caught and there is very little she can do other than look angry and defiant at Clone Chrissy standing over her. “Congratulations on figuring out my plan. Too bad it won’t do you any good now. Now, if you’ll excuse me, I have to go take care of the boss now, and then my pathetic twin.” Chrissy then looks at a new camera angle that is POV. The POV is the “collections” agent she convince to release her in the first scene. “Now, this is Matt, you remember him right? He’s gonna make sure YOU get down to Deep Storage. Tah, tah!” Chrissy leaves the scene as Khristall begs and pleads and protests what is happening. She struggles and fights as the POV moves closer and closer until he is practically on top of her. Khristall begs the POV to set her free, trying to become as flirtatious as possible, indicating to him that he can do whatever he wants with her if he lets her go. She moans and shifts around seductively, trying to give the POV the green light, mmph’ing to please just let her go. Eventually, the POV indicates that he will release her. Khristall’s eyes brighten up and thanks him and she seems relieved. She tries to tell the POV to hurry up before Chirssy returns to check on them. Worst. Collections Agent. Ever! (To be continued.) 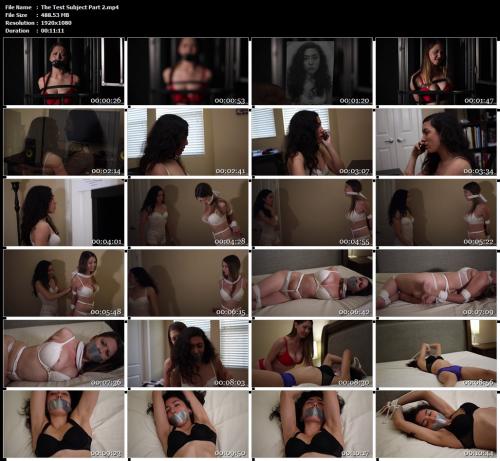