Chrissy is working hard in her lab at GagMe, Inc. when all of a sudden the boss walks in. She greets him and says she is very pleased that he has come down to be a part of her latest experiment. She warns him that before they see the test subject that he should not feel bad for her at all. The girl has found out some of the company secrets and was about to leak them too! All of sudden Chrissy remembers that she needs protection and puts on her company issued over-the-mouth gag and shows him to her traitor assistant who is strapped tightly to a chair. She is also cleave gagged to keep her quit while the tests take place. Test subject Khristall mmmpppphhss through the gag trying to get Chrissy to let her go but Chrissy just ignores her and carries on checking her bonds to make sure they are nice and secure. She takes some notes about her subject then grabs a red ball gag and shows it to the POV. She then pulls down Khristall’s cleave gag and shoves the ball gag in her as she begs to be let go. Chrissy has been working on perfecting a locking ball gag like this one and is very pleased with her work. She makes some notes and explains to the POV through her gag that she has to step out to get another gag to try out on her test subject. Once Chrissy is gone Khristall desperately looks at the POV and pleads for help. When she sees she is getting nowhere she tries a different tactic. She starts to squirm and mmmppphhh more seductively and eventually it works! He takes out her gag out to hear what she has to say and Khristall tells him that he must help her and that there has been a huge mistake! Chrissy comes rushing back in and tightly handgags Khristall. She pulls down her own OTM gag to talk to the POV. “See! I told you she would try to talk to you! This is a tough one…hand me that tape over there and help me move her to a more intimate location.my bedroom!”

Khristall is now wearing a sexy white teddy and has been tightly strapped and locked up in Chrissy’s bedroom for quite a while now. Her wrists, ankles, thighs, and chest are all bound and secure and she is tapegagged to keep her quiet. The POV stands over Khristall and watches her squirm to his delight. Khristall desperately pleads through her gag but she does not seem to be making very much progress. Then suddenly to her surprise he places a small key into her hand! Chrissy then enters the room wearing a red bra and panty set that she had on under her lab outfit. She thanks him for helping and tells him that she will take it from here, flirtatiously telling him that she will see him in a little bit, if he knows what she means. After he leaves she climbs onto the bed and taunts Khristall telling her that she’s not so clever after all and she’s not going to the delivery department after all. Instead she will be taken down into deep storage! Chrissy leaves to make the call for her pickup but while she is away Khristall manages to free herself from the straps with the key that was given to her. She heads back into the lab and desperately looks around the room for something that she can use to defend herself from Chrissy. She finds a remote control that she thinks might be capable of something! When Chrissy walks in the room Khristall points it at her and presses a button and magically Chrissy is bound tight in leather straps just like Khristall had been! Chrissy cannot believe that she is in this predicament again! Last time it was the auto tying chair and now the remote she designed has been used against her. Chrissy loses her balance and falls over on the floor. She begs Khristall not to do this to her but she instead presses another button on the remote and Chrissy is instantly gagged with a locking penis gag! She struggles angrily knowing that the deep storage guys are on their way and are going to be looking for a girl bound and gagged just like Khristall was supposed to be. Then Khristall puts on the lab outfit that Chrissy was wearing and applies the OTM gag over her duct tape gag. She sits at Chrissy’s desk and tries to look busy. Finally the man arrives to pick up the package. He comes in and Khristall points to Chrissy struggling on the floor. Before he takes her away he takes a moment to taunt her as she helplessly struggles, begging and pleading to be released! 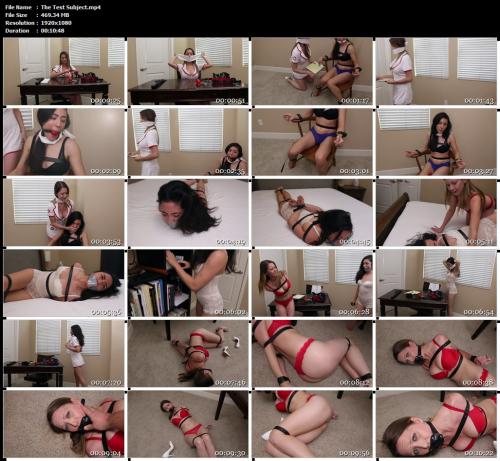