The Cataclysmic 2: The Cat’s Cradle – Cali Logans Power and Peril

Batgirl wakes up in a tangled mess of purple. Every time she tries to move, her limbs are snapped around by the giant rubber bands attached to her wrists, ankles & wrapped tight around her neck. As she stumbles around like a lost puppet, the Cataclysmic and Catwoman make their entrance.

Just for fun, the villains use whips and floggers to bat the bat around. Catwoman then presents a glowing pair of goggles that she places over Batgirl’s eyes, leaving her “blind as a bat”…and rather mindless too. As Batgirl’s brain is taken over by the goggles, Catwoman molests her body.

Its time to test out the device! Catwoman grabs her live feed camera and invites Gotham to watch the transformation of BATSLUT! The submissive Batgirl is instructed to show off her sexy dance moves for her fan. Now that she knows Batgirl is completely under her control, Catwoman moves on to the next task at hand…sexual humiliation!

After a grand show, Batgirl is ready for the grand finale! Catwoman rides her well trained pony around the room and leads her to a huge bowl of addictive stuff that the ravenous Batgirl eagerly snorts away at. The transformation is complete and this heroine will forever be remembered as the BATSLUT she is! 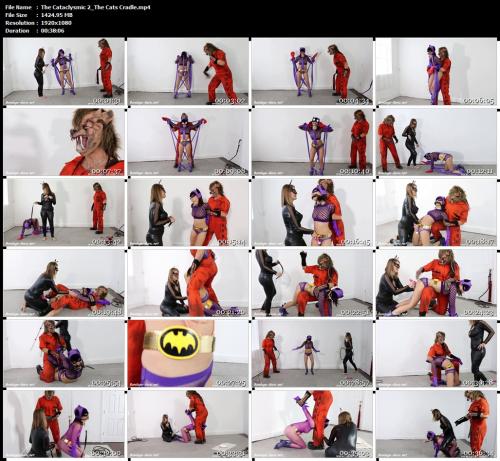 Perverted parole officer takes the parolee home for some fun, once again – Born to be Bound

Defiant little step daughter taped up and kept out of the way – Bondage: JJ Plush, Born to be Bound