Real life mother and Daughter Genevieve and Jeanette have decided to do a special video featuring the two of them gagging each other with their worn panties! They spend some time chatting about how long the panties have been worn and what they were each doing while wearing them, but then the time for talk is over! They each roll up the panties into big fa balls and stuff them into each others mouths, first Jeanette packing her mother’s mouth full of the soiled undies, then sealing them in with a nice tape gag, wrapped completely around her head several times, locking them in place. Then it’s Jeanette’s turn as her mother carefully and methodically packs her daughter’s mouth full of the nasty underwear, taping it in place for good measure. Next, they take more of the worn panties and make panty hoods, taping them in place over each other’s faces. The girls playfully laugh and giggle as their eyes peek out from around the hoods. Being gagged isn’t enough, so they seek out more bonding time – literally! Bound with their arms around each other, their hands bound to each others crotch ropes, the girls shuffle about, tugging the ropes and driving them deep into each other’s love nests. Finally, they realize they cannot free themselves, and begin to shuffle about their home in search of a tool to help them get free. When the only thing within their reach is a tiny pair of scissors, the girls resign themselves to an evening chewing on their dirty panties while helplessly bound together! 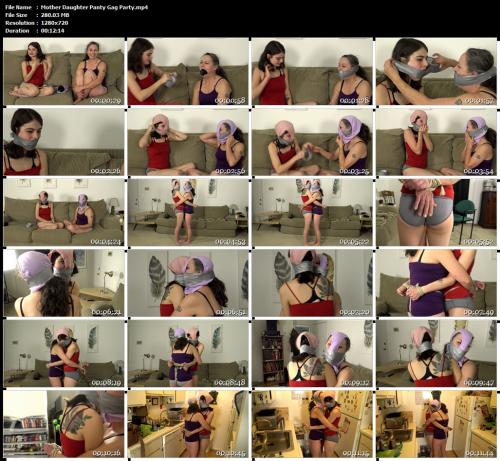 Moms- tie up your kiddos wrists while I get her ankles!! – Bondage: JJ Plush, Born to be Bound