JJ just a new job- with a fake ID and resume. Her new coworker is teaching her things when a man comes in to rob the place stating he knows there is thousands in cash in there. He tosses JJ a bag of rope and tells her to tie up her lovely coworker. JJ plays along like she isn’t a part of the robbery and does as she is told begging him not to hurt them. He makes a tied up Tabitha walk over to the credenza with the money in it before having her get to the ground to be gagged. JJ stuffs her mouth and wraps her head. Tabitha tries to push the gag out but is not successful. She is left struggling on the floor now knowing that her new coworker was not who she said to be. Then she is hogtied and duct tape wrapped around her gagged face. JJ apologizes to Tabitha telling her that she didn’t expect her to be so kind. She then wipes down all of the things she touched so her finger prints won’t be discovered. The bad guys grab the cash and leave a busty long legged tied up Tabitha rolling around on the ground. 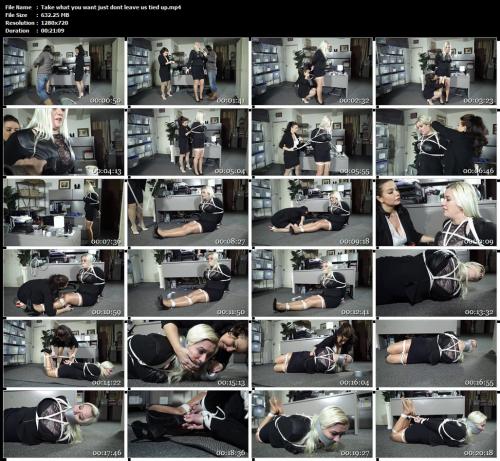 Don’t you want to stay with me forever? – Pepper Sterling, JJ Plush – Born to be Bound

She wouldn’t be making it to Coachella afterall… – Sarah Brooke, JJ Plush – Born to be Bound

Bratty office worker left hogtied with a stocking over her pretty young face – Anna, JJ Plush – Born to be Bound

The cute neighbor girl continues on…. – Bondage: JJ Plush, Born to be Bound

The busty beauty was bound to get into trouble – Bondage: JJ Plush, Born to be Bound

It just kept getting worse. – Bondage: JJ Plush, Born to be Bound