After pulling off a heist at a restaurant, Sahrye and her partner decide to take Christy, the waitress with them. Once they got her inside her place, the man left to go hide the getaway car. But before he left, he told Sahrye to tie Christy up and gag her too. Using rope, Sahrye grabs Christy and roughly ties her up. Christy pleads with Sahrye to let her go. But the next thing she knows, her mouth is stuffed and taped to gag her. But if Christy thought things could not get any worse, she was wrong. because Sahrye had a thing for girls and soon she was tormenting her victim. At one point, she even pulled Christy’s boobs out of her bra. She warned Christy that if she gave them any trouble, her boyfriend would also be doing some very naughty things to her. Sometime later, the man returned. He used more rope to hogtie and crotch Christy. The two then left her there to struggle bound and gagged. 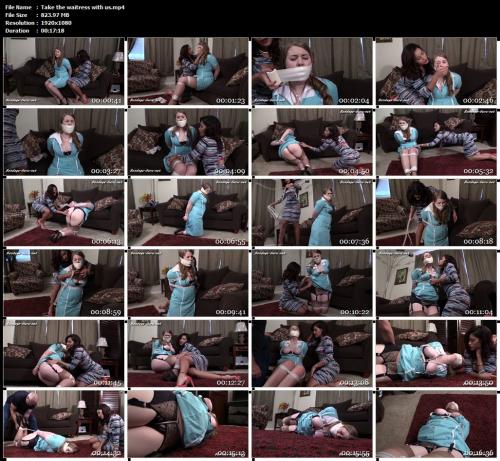 She mummified the town tease – Born to be Bound