Dixie brings her best friend Michelle(Vicious Vamp) over to her boyfriend’s new house. When Michelle tells Dixie that she needs to use the lady’s room, Dixie starts to tell her where to go. But Michelle cuts her off by telling that she already knows where it is. This surprises Dixie since the house is brand new and she does not recall Michelle ever being here. Then while Michelle is away, Dixie finds a pair of panties tucked in a cushion of her boyfriend’s sofa. All of a sudden, Dixie figures things out. Michelle knows where the lady’s room is because she has been here. Not only that, since her panties were found in the sofa, Dixie is sure that Michelle, her best friend, is fucking her boyfriend. Dixie tells Michelle that she wants to show her something in one of the bedroom. But when they get there, Dixie jumps her and wrestles her to the floor. She brings out rope and starts tying Michelle up. But instead of being distressed, Michelle starts to get turned on instead, Then once Dixie has her tied up, she confronts Michelle with the found panties. At first Michelle denies everything, but Dixie doesn’t believe her. To shut Michelle up, Dixie stuffs the found panties in her mouth and then wraps tape around her face and over her mouth to gag her. Now Michell is very turned and this really angers Dixiesince she was expecting Michelle to be remorseful. Instead, she start to antagonize Dixie and even admits to fucking her boyfriend. This causes Dixie to go into a rage and to get back at Michelle, she wants to humiliate her. She does this by pulling her great big boobs out of her bra and hogtying her with a tight crotch rope also tied between her legs. She then leaves her former best friend bouncing her big tits on the floor as she struggles bound and gagged. A short time later, Dixie’s boyfriend arrives. He is not surprised to find Michelle like this. It turns out he and Michelle came up with this plan for Dixie to find the panties so will get mad and tie Michelle up.. Being tied up by another girl has always been Michelle’s fantasy. 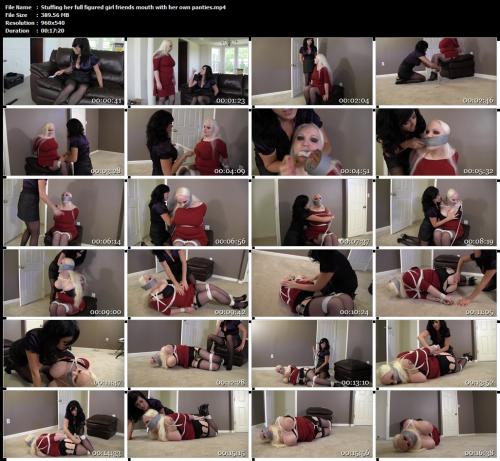