Rubber submissive Petgirl Kako and female dominant Elise Graves are traveling in Amsterdam together. The kinkiness of the city as well as the magnificent bathtub inspires some special play between them. Elise guides rubber-clad Kako into the deep tub, gags her, and ties her into a hogtie with rubber tubing. Next, Elise turns on the water, allowing the water to rise higher and higher. In an attempt to distract Petgirl from the rising water, Elise finds a waterproof vibrator to use on them both! Making herself comfortable right on top of Petgirl, Elise masturbates the two of them at the same time. Elise coaxes Petgirl’s head deeper into the water as she describes Petgirl as returning to the womb and then leaves Kako tied up, helpless, floating in the tub to drift off into new places. 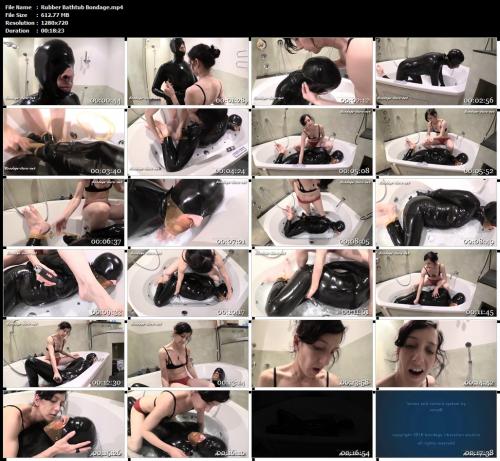