Naomi walks in the door from work, plops down onto the couch & begins to play on her phone. She hears her roommate’s phone buzz, and decides to take a look at the text message. Shocked at what she sees her roommate is up to, she decides to look through the apartment to see if there is anything else there to conform or alleviate her suspicions. She finds her roommate’s laptop, and begins going through it looking for clues. “My God, it’s true! My roommate IS going to break into the U.S. Mint!”. Suddenly, a hand clamps over Naomi’s mouth & she begins to struggle. She braces herself with her stockinged feet trying to get free, but she’s soon overpowered & goes limp on the couch.

The scene has Naomi very tightly hogtied on the floor. Her dress & pantyhose have been removed, and she only wearing her bra & thong. She is ballgagged, and her hair is tied back to her big toes. Suddenly, her roommate Nyxon returns home & asks her if she saw much of the plans. Naomi glares at Nyxon, and angrily yells, “Fuck you!”. She leaves Naomi to struggle for a few minutes, then tells her that she’s planted a bomb in the apartment because she doesn’t want any witnesses left behind. 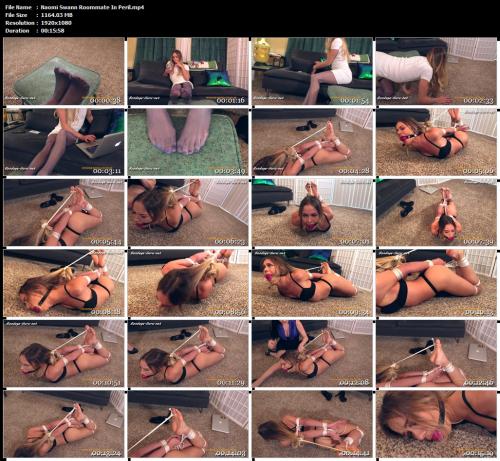