Nyxon met Luna Dawn while out at a club one night, and right away, Nyxon noticed that there was something special about her. After chatting her up for a little while, Nyxon buys Luna a drink, and before too long, Luna is stumbling into Nyxon’s apartment. Nyxon places her on the couch, and runs to grab supplies while Luna falls fast asleep. When Luna finally wakes up, she finds herself bound with duct tape. Her legs are frogtaped, and her arms are taped tightly behind her. Nyxon slides up beside her, and Luna demands to be let go. Nyxon just laughs, shoves a pair of pink satin panties in Luna’s mouth, then wraps duct tape around her head to seal them in. She explains to Luna that her job is to find women of a certain type, then trick them into coming back to her place. Once there, Nyxon makes a phone call to arrange the pick up with the transport van driver, and then the girl is taken away to auction. Nyxon tells her that she gets a commission for each girl that she finds, and that she’s certain that she’ll get a nice fat commission for Luna. Luna screams through her gag & tries to get out of the tape, but she’s bound up pretty good. Nyxon excuses herself to go phone the van driver, leaving Luna to struggle on the floor. 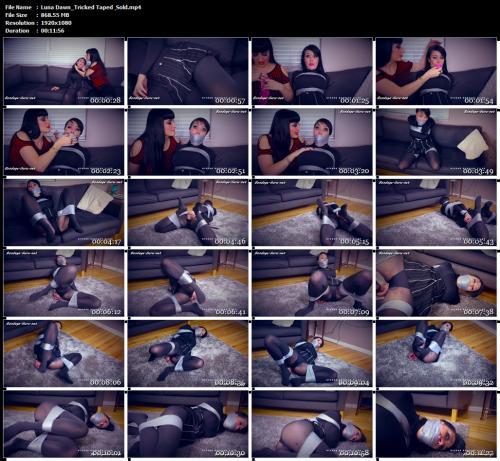