Chrissy has been asked over to her boss’s house (starring Milf Gigi) in order to discuss her recent shortcomings on the job. When she arrives she is immediately apologetic and begging to get to keep her job. Her boss lets her know that she has already prepared a bad review for Chrissy and all she has to do is send it off to corporate and she will soon be out of job, so it’s already too late and sorry is not good enough anymore. Chrissy tells her boss she will do anything to make it up to her and be able keep her job because she really needs it and can’t possibly find another job with her skills. So her boss goes on to show her a photo of another girl that used to work with her, and explains that they had a special arrangement together. Chrissy is shocked by the photograph she sees of a women tightly bound up with loads of rope and starts getting very worried and nervous. She hesitates a bit but eventually comes around when her boss promises to delete the write up if Chrissy agrees to try the same type of arrangement! Before they start, the boss has one more piece of business she wants to take care of. She wants to make sure Chrissy is extra humiliated, just like how she felt when she had to deal with angry customers, thanks to Chrissy not doing her job and talking on her phone too much! So she orders Chrissy to stand up and remove her clothes. Chrissy doesn’t think she is serious at first, but quickly realizes that she means it and starts to unbutton her satin blouse, all the while embarrased and trying to find a way around getting naked. Luckily for Chrissy, her boss allows her to at least keep her tan pantyhose on, and orders her to thank her for that! Then she leads Chrissy to the back room where she has some very special disciplinary action planned!

Chrissy notices all the ropes layed out along the table in front of her and knows what is coming next. Although extremely embarrased and uncomfortable, she submissively allows her boss to tightly bind her elbows and wrists together. Her boss decides to add a nice large ball gag to Chrissy’s mouth, extra punishment for her non stop gabbing at work, sure to teach her a lesson when she starts drooling uncontrollably! She gropes Chrissy’s big tits and teases her as she is bound and gagged in her humiliated position. Just when Chrissy thinks it can’t get any worse and her ordeal will soon be over, her boss pulls her arms back over head forcing her into a strict strappado! She tortures Chrissy by yanking her arms up and down as Chrissy mmppphhs through her gag. Before she ties off the strappado, she adds a tight crotch rope over her silky nylons and attaches it to the strappado. She finishes off by tying her crossed ankles, leaving her precariously balancing in her shiny stiletto high heels as she struggles for relief from the strict bondage. Her boss goes on to tell her she is tired now and will need a nap for a few hours before they can finish their arrangement, and Chrissy will have to stay bound and ballgagged the entire time! Chrissy tries to beg her boss to not leave her like this, but poor gagged Chrissy cannot say a word. She can’t even swallow as the drool starts to pool in her mouth and spill out the sides of the gag and she starts to panic. Her boss snaps a few pictures of her and tells her she will be back for her when she is rested and ready. Chrissy struggles hopelessly knowing she won’t be able to escape her humiliating and painful predicament, especially if she wants to please the boss in order to keep her job! 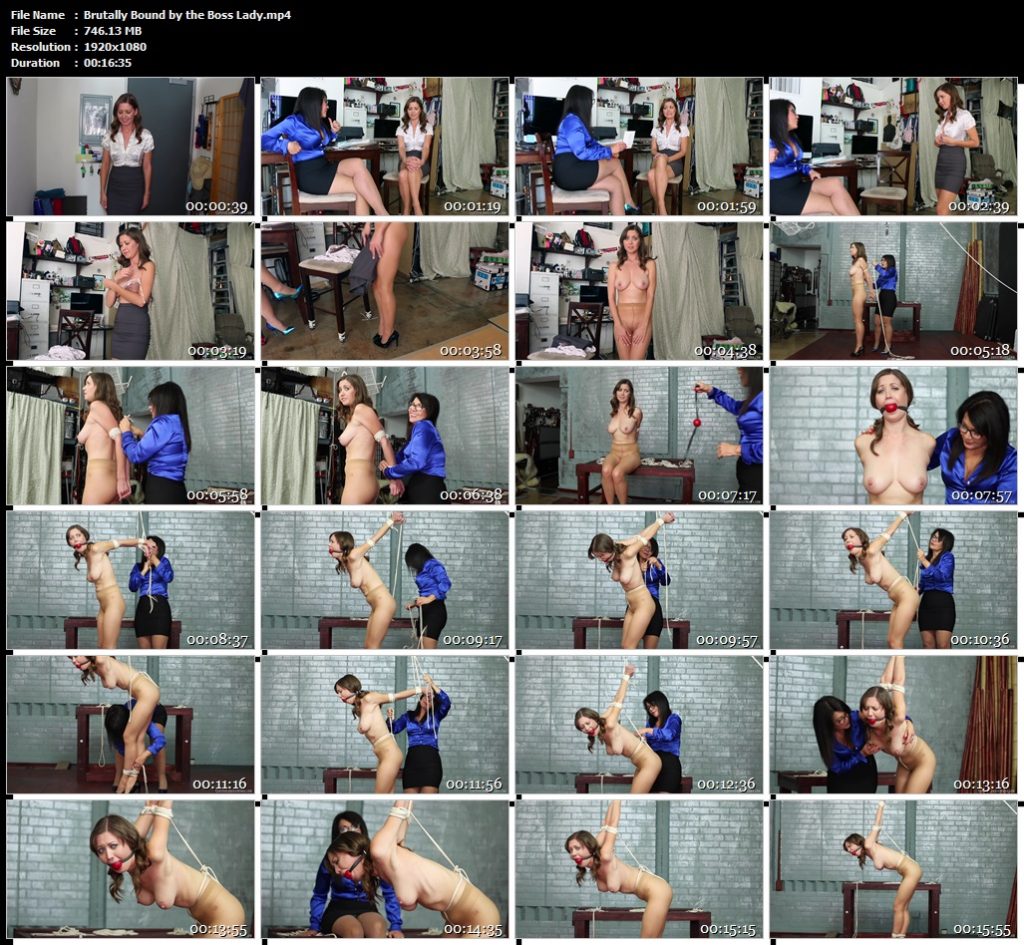